“Absolutely,” he responded. And that should have been the end of it. Except that’s when he broke out the jackhammer.

“You just look in Drumheller, look at all the striations of all the lines in the river valley. It’s as plain as the nose on your face. It’s been going on for eons,” he said.

Uh-oh. This is the kind of response climate-change denying politicians give when they want to diminish the impact of man-made climate change. They argue that the climate has been changing for thousands of years and what’s happening now is just part of the natural cycle that has nothing to do with people burning fossil fuels.

Of course Strankman didn't just stop there. When pressed further from Thomson he broke out the trusty "I'm not a scientist" line that conservative politicians use to dodge climate questions and to kill or delay effective climate policy.

Wildrose MLA Don MacIntyre apparently reads the same talking points. Here he is debating with Mike Hudema on the issue of Lake Chad's dramatic shrinkage in the past 50 years. 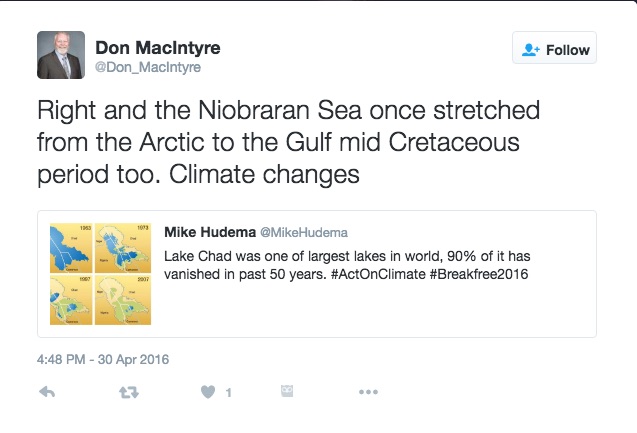 The Mid-Cretaceous period happened roughly 145 million years ago and I have little doubts that Earth had a much different climate back then. Where I struggle is how this has any connection to climate change in 2016. Let's take Lake Chad's shrinking out of it (the cause of its dramatic reduction is both from over-irrigation and climate factors) and let's put this tweet in the context of how Macintyre and so many other climate deniers like him use this argument to minimize humanity's impact on climate. It's a rhetorical trick used to kill and delay effective climate policy and its day is done.

Present day climate change is well understood. According to NASA the earth's temperature has climbed 0.7 degrees in just the past century. This is unprecedented and we need to deal with it.

Models predict that Earth will warm between 2 and 6 degrees Celsius in the next century. When global warming has happened at various times in the past two million years, it has taken the planet about 5,000 years to warm 5 degrees. The predicted rate of warming for the next century is at least 20 times faster. This rate of change is extremely unusual.

Thankfully we have a government here in Alberta that acknowledges the reality of climate change and is enacting positive and evidence based policy to fight it.

Of course it doesn't stop with just Macintyre. Another Wildrose MLA, Drew Barnes recently retweeted some of the kookiest climate denial stuff I've ever seen from a sitting MLA. 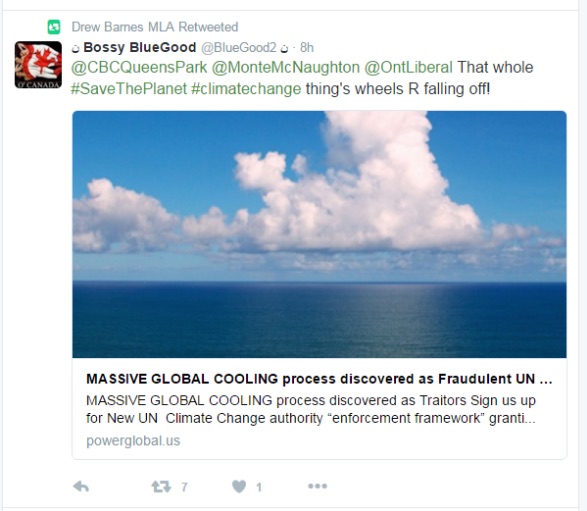 Please, I beg you to please click this link and check out the story that Barnes retweeted.

It appears to be a homemade Wordpress blog using a stock theme. There is a liberal use of all caps and various text sizes and it somewhat grandly bills itself as THE CONSERVATIVE VOICE IN GLOBAL NEWS.

It references an obscure paper but really who cares. This is climate denial kook town and Wildrose MLA Drew Barnes is gleefully skipping down main street.

This is the level of discourse you get from the Wildrose on climate and it shows how far away they really are from being a party that could govern Alberta.