A small group of wealthy Albertans are flooding the airwaves with attack ads before election spending caps kick in. Here's who they are

Let’s call the political advertisements that have been flooding television, radio, and print media all October what they really are: class warfare.

In December campaign finance restrictions kick in, including a hard cap on how much money can go towards political ads. A set of very wealthy Albertans are rushing to pour as much big money into ads as they can before that deadline hits.

It’s a small group and they’re not your average working-class folks. It’s a group of people so wealthy that they can buy billboards, newspaper advertisements, and expensive radio and television ads to push for their own interests.

In the past few weeks we’ve seen more and more of this big-money politics from one group in particular. They’re called Shaping Alberta’s Future and they’re stumping for Jason Kenney.

In just a few months they’ve raised hundreds of thousands of dollars--more than the Alberta Party has raised in an entire year. And they’ve put that money to work right away, buying up television ads across the province that call for worker protections to be rolled back, for minimum wage to be lowered, and for Alberta’s climate plan to be torn up.

About two thirds of that mountain of cash came from the Motor Dealership of Alberta, an umbrella group that represents car dealerships--think of the MDA as the car salesmen lobby. The MDA met with Jason Kenney on September 6th, and we’ll never know exactly what was said behind closed doors but immediately after the meeting MDA chair Andrew Robinson sent this letter out to the dealerships in the MDA. 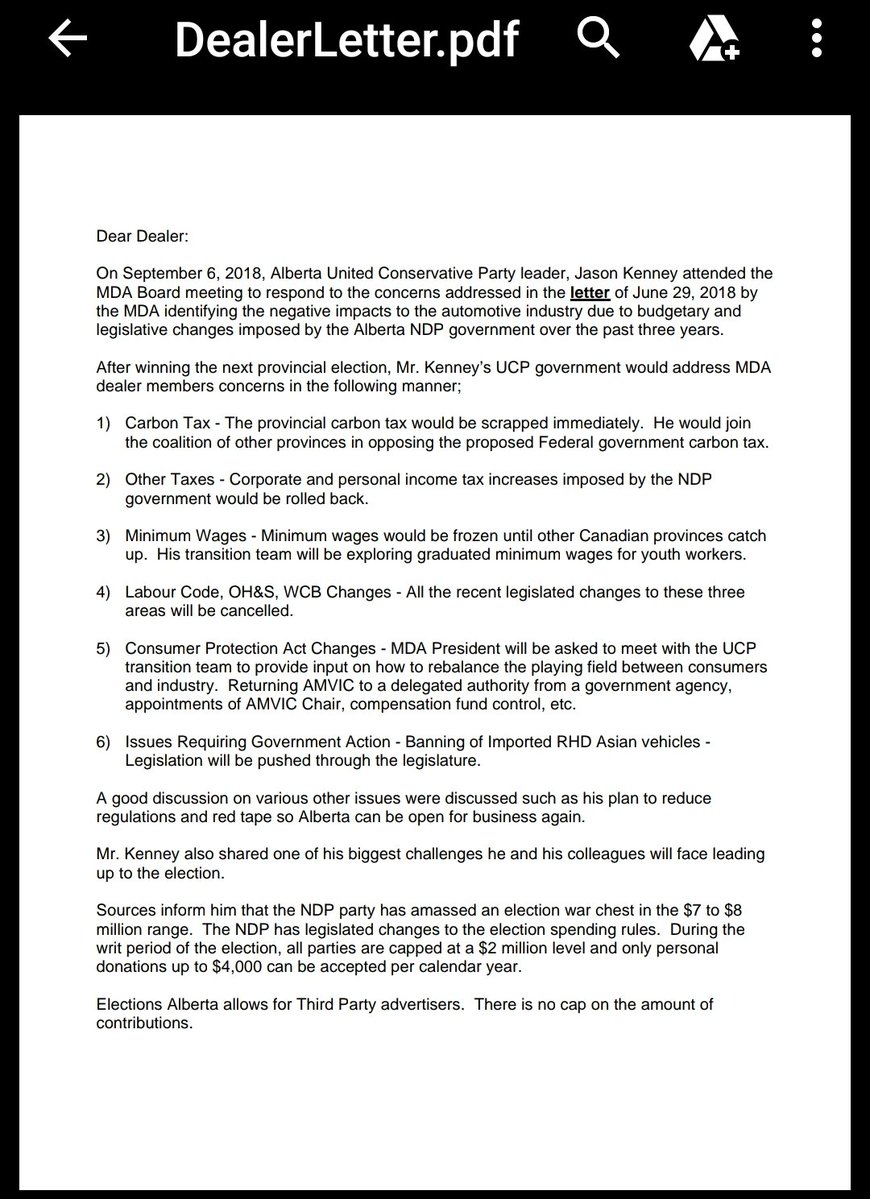 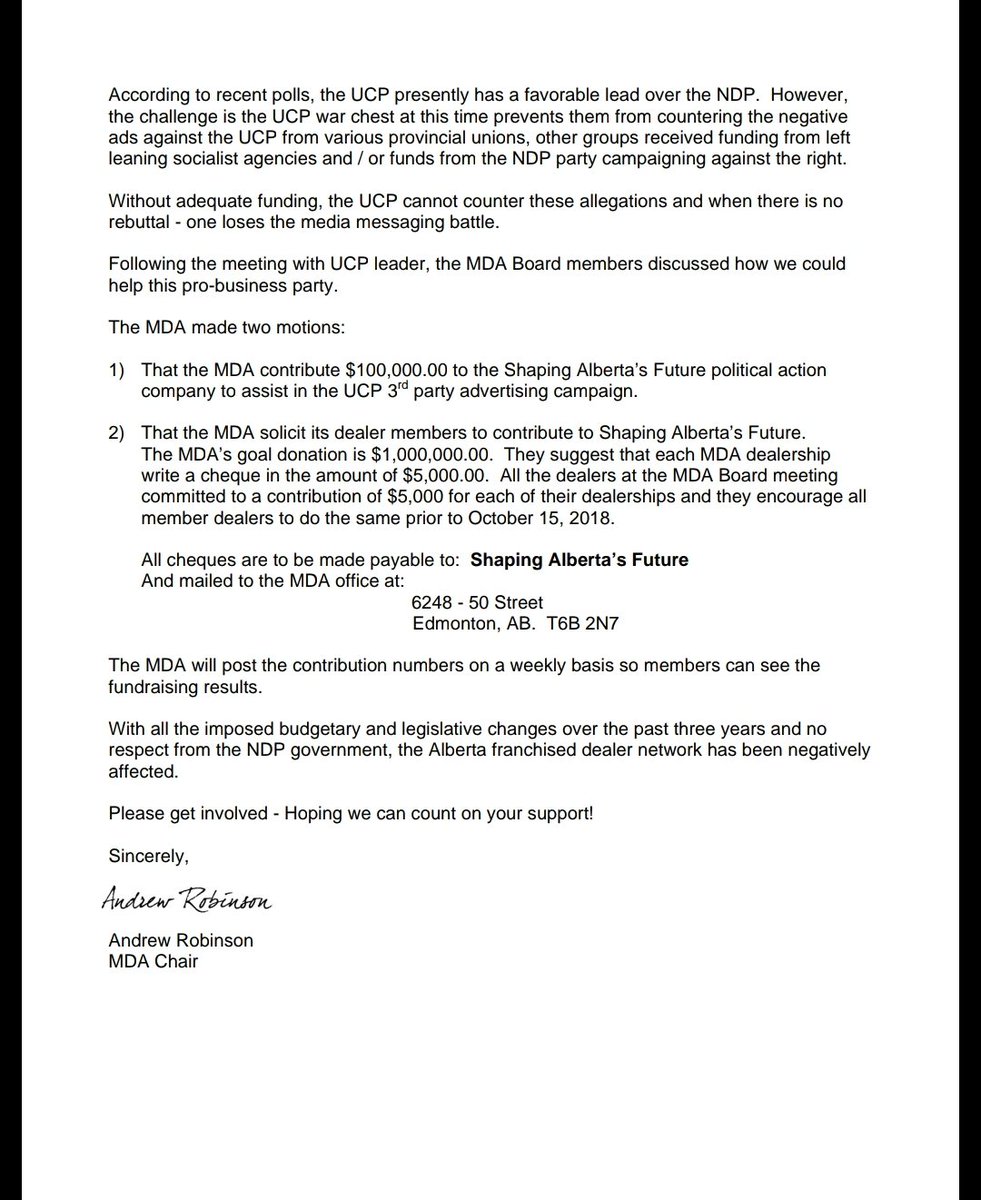 Robinson says Kenney has committed to a list of MDA-favored policies that include not just the usual anti-worker fare but also some juicy handouts to MDA dealerships--banning the import of Asian right-hand-drive vehicles which compete with the MDA’s cars, and returning AMVIC, the regulatory body with oversight over Alberta’s auto industry, to a toothless and dysfunctional state.

The NDP are alleging that there’s collusion between the UCP and Shaping Alberta’s Futures and maybe they’re right. We’ll have to wait until the elections commissioner rules on the matter. But whether it’s legal or illegal, what we’re seeing is actual class warfare--wealthy Albertans and private interests buying their way into the policy book of a major party in order to pay their employees less, ban their competitors, and cut their own taxes.

Since there are a lot of corporations and numbered companies in Shaping Alberta’s Future’s financial disclosure documents we wanted to put them in context by breaking down exactly who some of these donors are. Here’s a quick list of the PAC’s top donors, all of whom have donated ten thousand dollars or more to pay for these pro-Kenney, anti-worker attack ads.

Richard Romeril owns CMP Automotive Partnership through his company Autoplus Resources and gave a cool $30,000 to Shaping Alberta’s Future. That’s almost half the median income of an average worker in Calgary.

‘0946363 BC Limited’ gave $10,000 to the pro-Kenney PAC but according to a corporate search it wound down its operations in June 2016 a month before Shaping Alberta’s Future got started. Other numbered corporations named in the biggest donor group are ‘57024 Alberta Limited,’ which doesn’t exist, and ‘991127 Alberta Limited’ which Lloyd Ypma in Taber owns. They each gave the PAC $10,000 too, and it appears as though Ypma contributed another $10,000 through his company SLM Spud Farms Limited.

Morrison Homes Limited, owned by Allan Morrison in Calgary, bought $10,000 of the attack ads--not Morrison’s first foray into funding. He gave $5000 to Kenney’s Alberta Advantage PAC and donated $2250 to the PCs before they dissolved in 2017.

Dennis Nolin runs MTE Logistix Management, which he owns through his holding company Bar-N-Holdings. MTE threw a huge fifty thousand dollars into the pot for Shaping Alberta’s Future’s attack ads but that’s not the last time Nolin has cut a check to support Kenney--in 2017 he had MTE give $26,000 to another Jason Kenney PAC, the Alberta Advantage Fund.

Stanley Milner, a fixture in Alberta’s conservative circles for decades, gave the PAC a hefty $25,000, and that’s just a drop in the bucket as far as Milner’s funding of Alberta conservatives goes. He pumped an incredible $75,000--more than most Albertans make in a year--into Jason Kenney’s Alberta Advantage PAC last year and since 2004 has given more than $250,000 to federal and provincial conservatives.

You can read the whole list of contributions here on Shaping Alberta’s Future’s financial disclosures, where you’ll see many more numbered companies and auto dealerships who’ve put $2000-$5000 towards these PAC attack ads.

Even with the safeguards against dark money that the NDP put in place in 2015 we’re never going to be able to keep pace with the rich when it comes to buying billboards and TV spots. But you have a voice and a vote--each of us do. And there are ways for us to work together to resist Kenney and stand up for the interests of working-class people that use our time and our energy and our voices more than they use money.

We’re organizing a grassroots campaign to counter the big-money PACs and to spread the word about just how bad Jason Kenney’s policy book is. If you haven’t signed on to our Stop Kenney campaign yet, here’s your chance. And if you have, please share this article with someone you know who might stand with us. The folks we’re up against may have all the money in the world, but there’s more of us than there are of them. 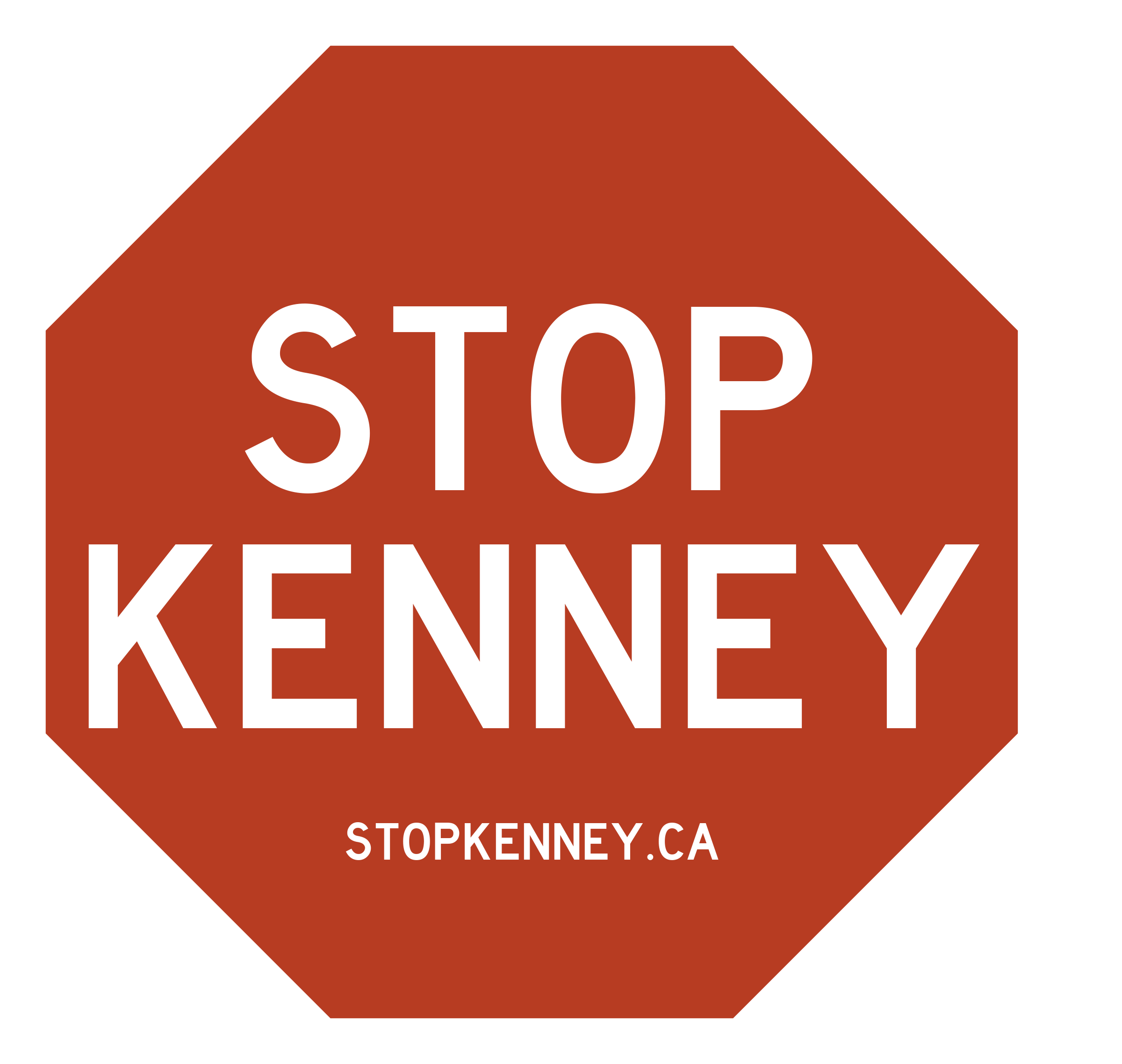