Jeff Callaway, the president of the Wildrose Party doesn't even hide it. It's right there, in a pinned tweet at the top of his Twitter profile.

This is the type of leadership you can expect from the Wildrose Party. The same old tactics, accusations and distortions that the Friends of Science and other climate denial groups have employed for the past decade to block and frustrate effective climate policy.

We could dive into his pinned tweet but he's really just knocking down a straw man. Who here believes that Callaway and the Wildrose would be in favour of a global carbon credit trading scheme? The solution to a collective action problem like climate change is not to deny, to obfuscate or to say now is not the time. It's especially unhelpful to point to the next person and say "You first."

A quick scan through Callaway's social media feed finds even more evidence of how he really feels about climate change. 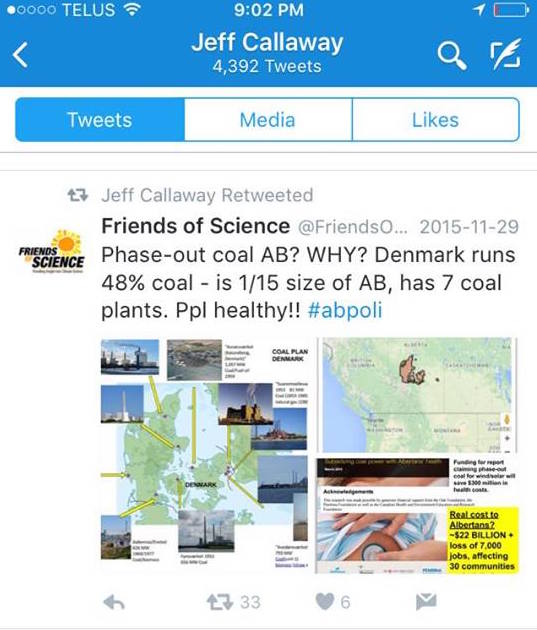 Callaway is also a fan of the Galileo Movement, essentially the Friends of Science of Australia. Careful everyone, contrary to all accepted climate science our carbon dioxide levels are too low!

Callaway also loves to indulge in the bad science talking point that volcanoes are affecting the climate more than the past 150 years of human emitted carbon pollution. This talking point was pretty effectively annihilated by Bloomberg in their 2015 online piece "What's Really Warming the World?"

Yeah, human industry releases about 100 times more CO2 than volcanic activity but keep grasping at straws. I'm sure the weather you're seeing outside your window is totally relevant to climate change!

This is just the latest in a long line of climate related nonsense the Wildrose continue to put out. The latest scandal has repeat offender Rick Strankman apologizing to Alberta's massive Ukrainian population after comparing the Alberta government's carbon tax to the genocide of 7-10 million Ukrainians in the Holodomor. And it wasn't just Strankman who's responsible, eight other leading lights in the Wildrose caucus signed off on the editorial as well.

While the leader of the Wildrose puts on a brave face and says out loud that he believes climate change is real, caused by humans and that we need to do something about it it's hard to take him at his word. After all these are the people Jean has surrounded himself with and he's doing his level best to block and stop the government's climate plan even though a climate tax is the economically efficient way to reduce carbon pollution. Just ask the half a dozen other prominent conservative Canadian leaders who love carbon taxes.

But don't stop now Wildrose, we're always up for another gong show.