The Wildrose Party is presumably paying Ezra Levant's company, The Rebel, to distribute fundraising messages to the Rebel's email list.

The Wildrose Party is presumably paying Ezra Levant's company, The Rebel, to distribute fundraising messages to the Rebel's email list.

The message is signed by Todd Loewen, the Wildrose MLA for Grande Prairie-Smoky and it has the Wildrose logo at the bottom. The top of the message has a Rebel Media banner and underneath a bar that says "Sponsored Announcement."

In the second to last paragraph the email asks for a donation of $25 to the Wildrose to help their web team reach more Albertans.

The nature of the business relationship between Alberta's official opposition and Rebel Media is unclear at this point but the Wildrose Party’s decision to “sponsor” Rebel Media raises questions about which of the organization’s hateful and destructive views that Wildrose might also sponsor. Below is a non-exhaustive list of the types of views that Wildrose is helping to advance with their financial support of Rebel:

For every genuine trans student, there will be 100 peeping toms and pranksters. And several actual molesters. Like Christopher Hambrook.

The left talks about safe spaces & rape culture. Normally they're hypochondriacs. But they're literally letting men into girls' change rooms

Or when he tweeted out this photoshopped picture of Omar Khadr holding a photoshopped sword to Amanda Lindhout's throat.

Or this particular gem 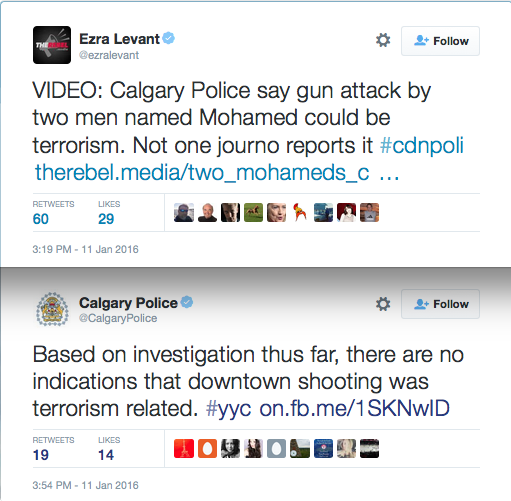 And since the fundraising email mentions the carbon tax it's probably worth rehashing some of the former tobacco and oil and gas lobbyist's more colourful pronouncements on climate change.

Levant, who is based in Toronto, described a landmark report from the Intergovernmental Panel on Climate Change as “science fiction.” He has also described climate change as “a hoax” and said “global warming isn’t happening.”

It's interesting that the Wildrose would tie themselves so publicly to a man who so vehemently denies the science on climate change given how outraged they become when they're called climate change deniers.

You also have to question the judgement of the Wildrose in hitching themselves to a man who has a multi-part section in his Wikipedia profile dedicated to libel cases he's either lost or had to apologize for.

But despite all of this I'm still left with more questions than answers.