And how more wind turbines and solar panels can stop it

One of the good things from phasing out coal in Alberta and replacing it mostly with renewables, beyond the massive positive health and economic effects, will be stopping Alberta’s coal-fired oligopoly from manipulating our electricity market.

Take the example of Transalta - a coal giant. They own more than 3500 megawatts of coal-fired power throughout Alberta. You may have heard the company’s name in the news when in September 2015 they agreed to pay a $56 million penalty for manipulating Alberta’s electricity market. The company shut down coal plants that were promised to other market players at key moments of high demand in order to jack up the price of electricity and reap a windfall. Internally they called these events discretionary outages.

This wasn’t the first time Transalta has been caught with their hand in the cookie jar. In 2014 Transalta made a $149 million payment to settle unfair pricing allegations in California. In 2012 Transalta was fined more than $370,000 for market manipulation in Alberta.

Transalta’s defence in their September 2015 case, which ultimately failed, was that they were simply doing something that’s totally allowed in Alberta’s electricity market – economic withholding. But the end result of economic withholding and discretionary outages are remarkably similar.

In the AUC’s decision against Transalta (which I encourage you to read, it’s fascinating), Alberta’s electricity market cop, the Market Surveillance Administrator, secured emails and memos that were relevant to the case. The people behind this strategy (which they called the Portfolio Bidding Strategy) lay out just how similar economic withholding and discretionary outages are. From page 61 of the decision:

"The Portfolio Bidding Strategy identified the opportunity to use two key strategies to capture higher revenues: economic withholding and discretionary outages. The authors of the executive summary stated that “[t]he aim of both strategies is to move settled pool price higher by physically removing MW [megawatts] from the supply curve by offering them in at a higher price or by removing [them] from the system altogether.”

Both tactics result in a manipulated electricity market and a price spike – the only difference is that one is totally legal and the other is not. 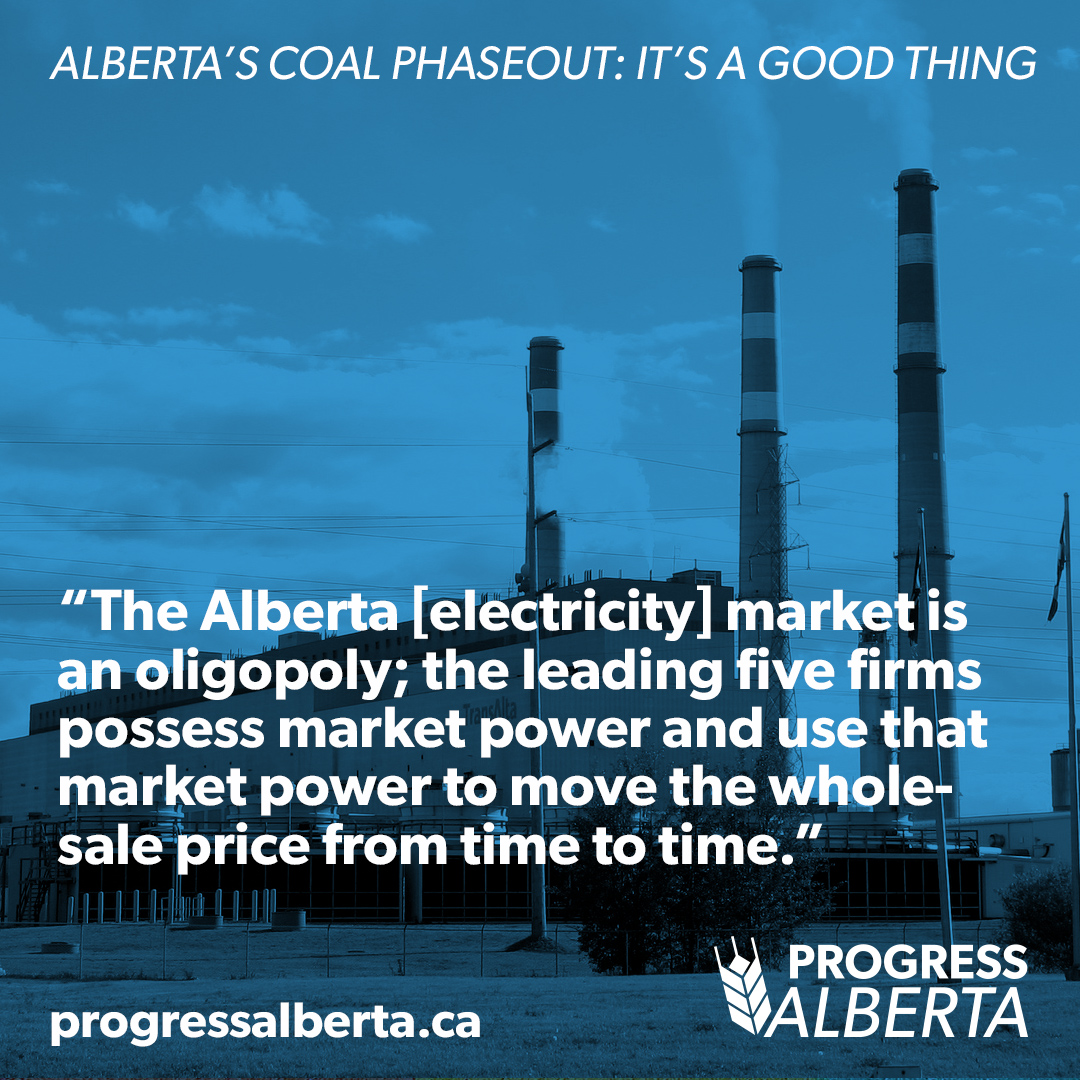 So what exactly is economic withholding and why should we care about it?

Here’s the definition according to Alberta’s electricity cop.

“Economic withholding’ means offering available supply at a sufficiently high price where, as a result, the pool price is raised.”

To understand what this means we have to dive into the electricity market in Alberta a little bit. A warning, Alberta’s electricity market is a complex morass of regulations and market rules. It’s fantastically complicated despite the fact that there is only one commodity for sale and it has to be consumed immediately.

But here’s the stripped down version. In Alberta the electricity generating companies bid into the electricity trading system. All the various actors bid in at varying prices for various reasons. Every hour the system operator determines the demand and puts out a call for the amount of electricity the grid needs, filling the amount needed from the bottom up. The last bid in determines the “marginal” price of electricity for the hour. Any bid under that cut off line gets paid that marginal price, everyone above that cut off line doesn’t. Thus the hourly price of electricity in Alberta goes up or down based on this interplay of supply and demand.

ECONOMIC WITHHOLDING IN THE REAL WORLD

“Economic withholding is not uncommon in the Alberta market… What’s notable in this quarter is that withholding of over a thousand megawatts by one participant was more prevalent than in any quarter in the past two years.”

The company named in this report is Transcanada. You might think of them as more of a pipeline company but they control a big chunk of Alberta’s coal fired generators and they traded more than half a billion dollars worth of coal-fired electricity in Alberta in 2014.

Electricity generators that are online have to offer their available electricity to the market but they can choose the price of their bid. By bidding in at the max price they can effectively take their units off the grid. And when supply is constrained due to large coal fired generating units that go down unexpectedly, like there was on May 30 (both Sundance 2 and Battle River 5 were offline), this strategy can cause big price spikes.

For six hours on May 30th, prices spiked thanks to this strategy peaking at $935 a megawatt hour, only $64 less than maximum possible electricity price. Transcanada produced less power through their bidding strategy but by utilizing economic withholding they manufactured an artificial shortage of electricity and reaped the rewards of a sky-high electricity price.

As you can see in the graph Transcanada tried to economically withhold early in the morning on May 30th but with a lack of demand and the other big generating units online it didn’t work. But when Battle River 5, a 385-megawatt coal power plant owned by ATCO, falters and then goes offline that morning the bidding strategy works and the price spikes from 10 am to 4 pm. 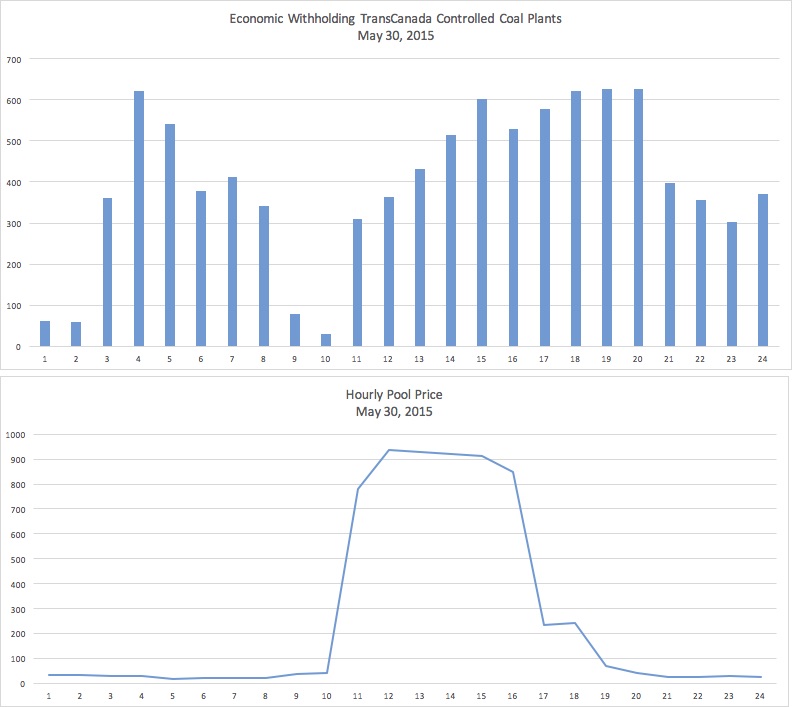 According to the people who monitor Alberta’s electricity market it is “a tight oligopoly”. Think of Canada’s shady telecom oligopoly but only instead of smart phones they trade in a basic building block of our entire economy. There are only five main players in Alberta – all incumbents who benefitted handsomely from deregulation.

From the MSA’s state of the market report in 2012.

“On the supply side, the Alberta market is an oligopoly; the leading five firms possess market power and use that market power to move the wholesale price from time to time.”

Not a bad little power to have when you’re trading hundreds of millions of dollars worth of electricity in a year.

You frequently hear coal proponents fret about the future of Alberta’s electricity market without cheap coal around. But cheap coal is an illusion - we’ve just never paid for the asthma or for the carbon emissions. And when you factor in what big coal generators do to the market with bidding strategies like this the fallacy of cheap coal becomes obvious rather quickly.

Phasing out coal is not only the right thing to do for the health of Albertans, for climate change and for the economy. It’s the right thing to do for Alberta’s electricity consumers. Wind energy is both the cheapest source of electricity in the province and the cheapest source worldwide (according to Lazard’s global levelized cost of energy analysis). Solar too has followed in wind’s footsteps, the price marching ever downward. The price of utility scale solar PV has dropped 25 per cent in the last year and 80 per cent since 2009. 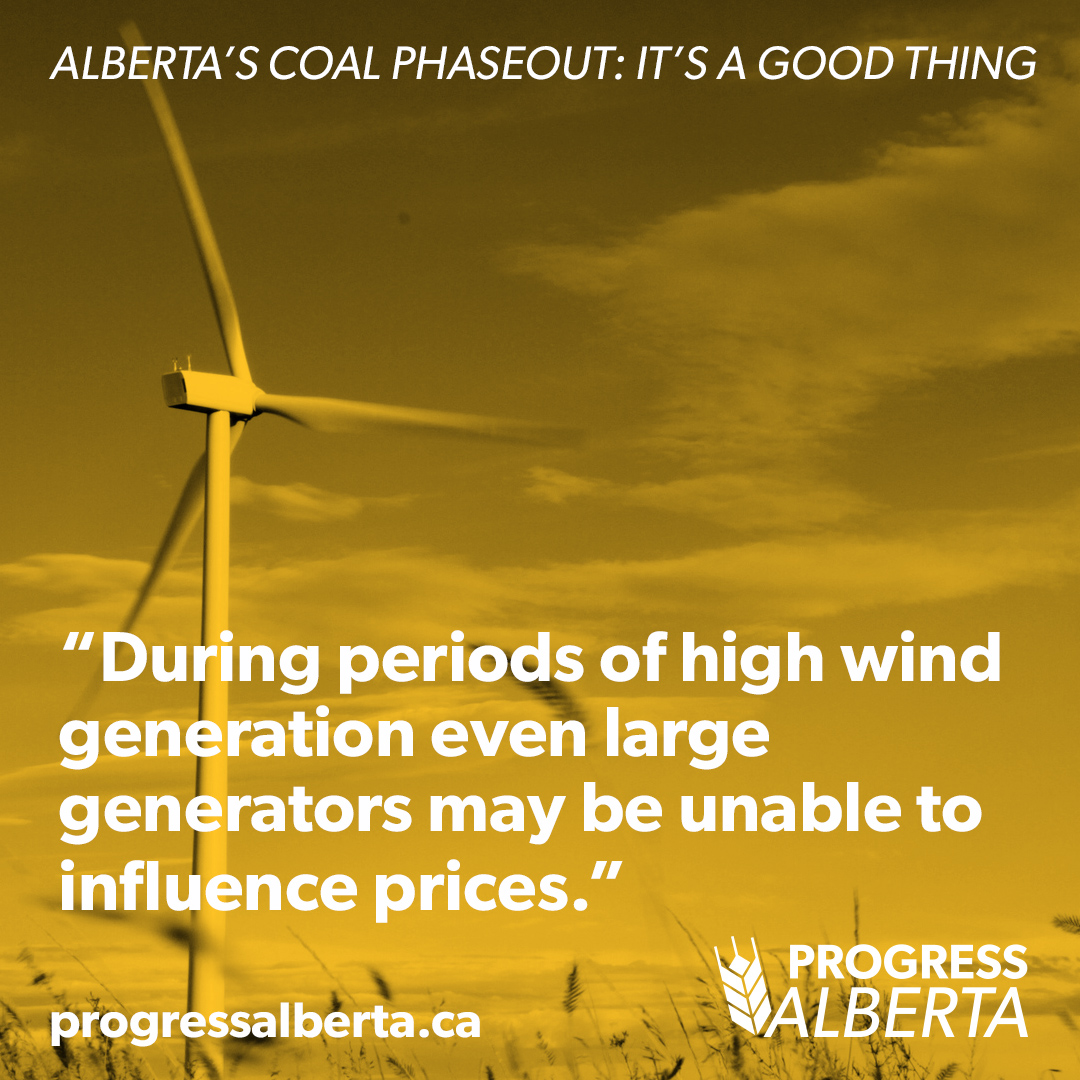 And when the wind is blowing in Alberta the big coal fired players can’t manipulate the electricity market. From the MSA’s state of the market report in 2012, “during periods of weak demand or high wind generation even large generators may be unable to influence prices.”

This is independently confirmed in the emails from the traders involved in the Transalta case. They timed their outages around forecasted periods of low wind and concurrent outages of other plants.

“The weekend I am assuming no wind. There is tightness for the weekend with two units out but nothing compared to the Thursday and Friday as we lose between 200-400MW of demand. Let me know if you want to discuss.”

The more wind and solar generators in more places the better chance Albertans have to crack Alberta's electricity oligopoly and to make electricity market manipulation a thing of the past. It’s called distributed generation and the more of it we have owned by variety of players the less oligopolistic our electricity market will become.

When you factor in what we pay for in health costs, climate change risk and add in what coal-fired generators can do to Alberta’s electricity market it’s evident that coal isn’t as cheap as we think. Phasing out coal and replacing it mostly with renewables is not only the ethical thing to do it’s the smarter economic choice for Alberta’s electricity consumers.

If you think we need a better electricity system join Progress Alberta. Simply head here and enter your email address. You’ll also get the Progress Alberta Report in your inbox every week and we'll keep you in the loop as we continue to write and organize around electricity market reform.