Now they can devote more money to the classroom

Unlike some organizations a group of 25 rural Albertan school boards saw which way the winds were blowing on carbon risk and hedged themselves accordingly.

In January 2016 the Bull Creek Wind Project's 17 wind turbines started spinning and putting electricity onto Alberta's grid. The 29 megawatt project is located near Provost in eastern central Alberta, near the Saskatchewan border. This project was built as a result of an agreement signed by the 25 school boards. They signed a 25-year power purchase agreement for the output of those turbines and as a result they're not exposed to Alberta's current or future carbon pricing plans and the effects those might have on the cost of fossil fuel fired electricity. 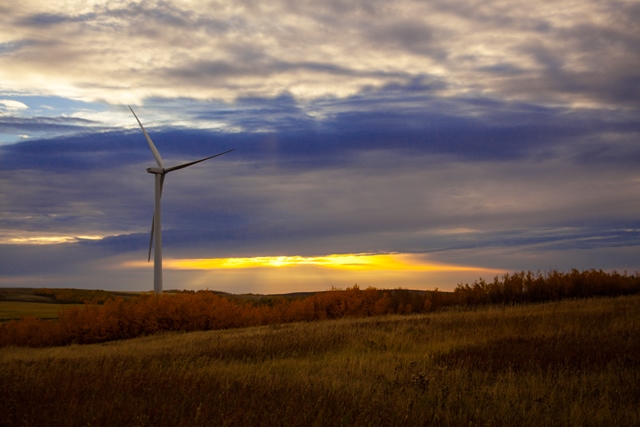 A bit of backstory. The Alberta Schools Commodities Purchasing Consortium is an alliance of many rural school boards. Instead of having every single school board go out and negotiate a contract they banded together after electricity deregulation so they could buy in bulk and leverage their buying power.

Francois Gagnon is the associate superintendent of the Fort McMurray Catholic school district. He's confident that he and his group made the right decision.

"You benefit yourself against not having to pay for any future carbon pricing and you can also sell some of those carbon credits to the market and make additional money off of that. It's a win-win from a financial point of view."

Locking in a long-term carbon free form of electricity for 500 schools now looks like a brilliant business decision after the NDP raised the carbon price for big emitters from $15 a tonne to $30 a tonne by 2018. And over the next 25 years the possibility of the carbon price rising even further seems virtually certain.

"We reduce our risk because we're reducing our exposure to carbon pricing," says Gagnon.

"If we spend less on electricity there will be more money for the classroom. Any money that we don't spend on utilities it's good because that money then becomes available for instruction."

And as facile as it may sound, they really are doing it for the children. They are setting a positive example, there's educational value and they're saving money.

Grant Arnold is the CEO of BluEarth Renewables, the company that won the bid and developed the project. He laid out the reasons why it was a good call for the school boards to invest in wind energy.

To be clear the electrons produced by this specific wind farm are not special delivered to the various schools. The Bull Creek Wind Project kicks its power into the grid and then the various school boards obtain their electricity from the grid. If Bull Creek produces more power than the schools require it is sold on the spot merchant market.

But it's a win-win for both sides. BluEarth gets a wind energy project at a time when it was very hard to come by long-term power purchase agreements and 500 schools get long-term cost certainty for their electricity. Albertan electricity consumers also win because the more wind energy we have on the grid the more it lowers prices for everyone when the wind blows.

The fact that the government of Alberta's climate plan was announced after the fact is just a bonus.

"I don't think anyone in the room knew where we going to be today. I don't think any of us are that smart," says Arnold. Still you can tell from speaking with him that he thinks very highly of the negotiating acumen of Gagnon and and the consortium.

"They had thought this through. They were wise in having this competitive process. They were well aware of what they could do with their purchasing power."

While neither side will divulge the exact cost of the deal Arnold says that the price is on par with what you would get from combined cycle natural gas power plants.

As Alberta rolls out its climate plan this kind of deal starts to make more and more sense. Hedging yourself and your organization against future carbon risk is just the smart and money-saving thing to do. As other school boards and municipalities start to complain about the carbon tax it's worth holding up these 25 school boards as an example of what you can do to mitigate carbon risk.

Here's a very cool video of the Bull Creek Wind Project getting built. If you want more positive stories from Alberta's clean energy transition sign up to our mailing list at ProgressAlberta.ca

In case you're curious here are the 25 school boards that signed onto the deal.