Conservatives in Alberta are vocal, well connected and well funded but they are not the majority. Progressives are.

Progressives in Alberta are now the quiet majority.

Sweeping demographic changes have transformed this province. Massive international and inter-provincial migration to Alberta makes it one of the youngest, most educated and most urban provinces in all of Canada.

These new Albertans simply don’t have a deep connection to traditional conservative Alberta political parties and they’re open to new ideas and values. Conservatives in Alberta are vocal, well connected and well funded but they are not the majority. Progressives are.

Conservatives have done an excellent sales job of convincing Albertans that this is a “conservative” province. But is it really? Let’s consider these facts. Three out of five Albertans consider themselves progressive, we elect progressive mayors and the last two provincial elections have been decided by progressive voters.

In order to explore these changing attitudes, Progress Alberta commissioned Abacus Data to poll a representative sample of 1,000 Albertans between Dec. 2 and Dec. 7. The results were illuminating and surprising.

When Albertans were asked whether they consider themselves to be progressive, 59 per cent said yes. 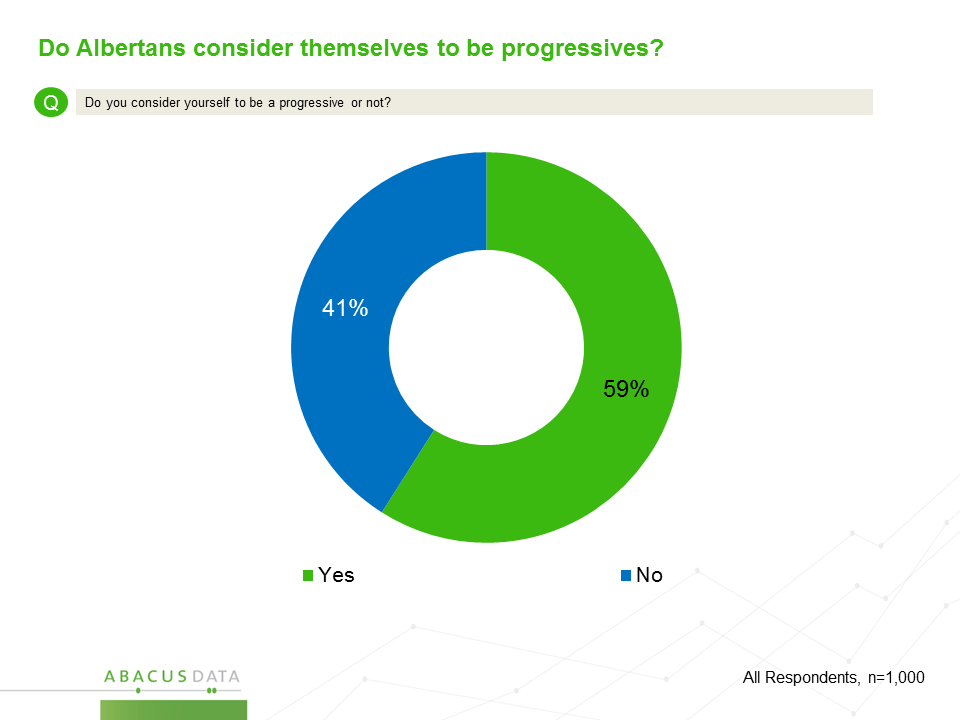 Based on election results, demographic trends and polling data it’s clear - progressives in Alberta are now the quiet majority.

"Urbanization, in-migration, and generational change are all shifting the province’s political attitudes and behavior,” says David Coletto of Abacus Data. “Most Albertans think the province has become more progressive in the past five years. More identify as progressive than they do conservative. And the province’s most popular political leader [Naheed Nenshi] is seen as a progressive himself. Perhaps it might be time to reconsider the notion of conservative Alberta.”

Progress Alberta is a new independent organization founded to further these positive changes in Alberta. It will be a positive, proudly progressive force that will help build a stronger, more diversified economy, a healthier environment and a more inclusive province for all Albertans. It will be an organization built on the progressive values of sustainability, shared prosperity, equality and democratic renewal.

Understanding the massive demographic shift in Alberta in the past 20 years is important to understanding how Alberta has become a progressive place.

From the following population distribution graph, the demographic difference between Alberta and the rest of Canada becomes clear. 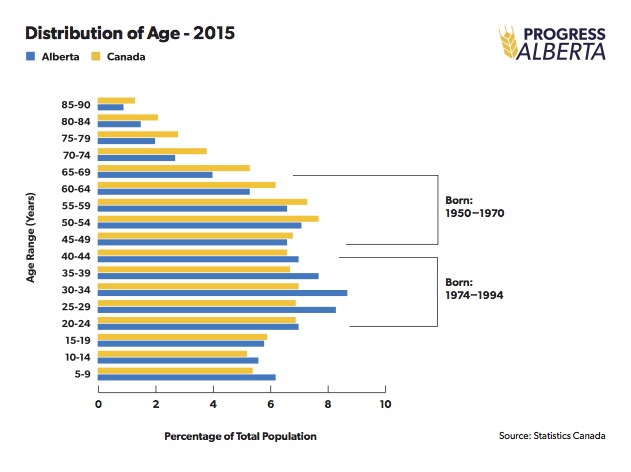 Compared to the rest of Canada, Alberta is a demographic anomaly. Alberta has more young people than older people - millennials and generation X outnumber the baby boomers in Alberta. The 18 to 40 year old crowd dwarfs the over 55 set.

Not only is that great for Alberta’s future economic growth and the ability to pay for the costs of an aging population but it is fantastic news for political parties with a progressive point of view.

The single biggest demographic that identified themselves as progressive were the 18-29 age range.

Alberta’s population has also become highly educated over the past twenty years. In 2014 almost 26 per cent of Alberta had a university degree, double the amount in 1991. And two out of three people with a university degree view themselves as progressive.

"Those living in either Edmonton or Calgary were more likely to self-identify as progressive than those living in other regions of the province.

Progressive identifiers were also more likely to have higher levels of education, and more likely to live in urban communities," says David Coletto of Abacus Data.

Since 1995 Alberta’s population has increased by 1.46 million people. That’s an increase of 54 per cent. The majority of this population increase has come from international and interprovincial migration. 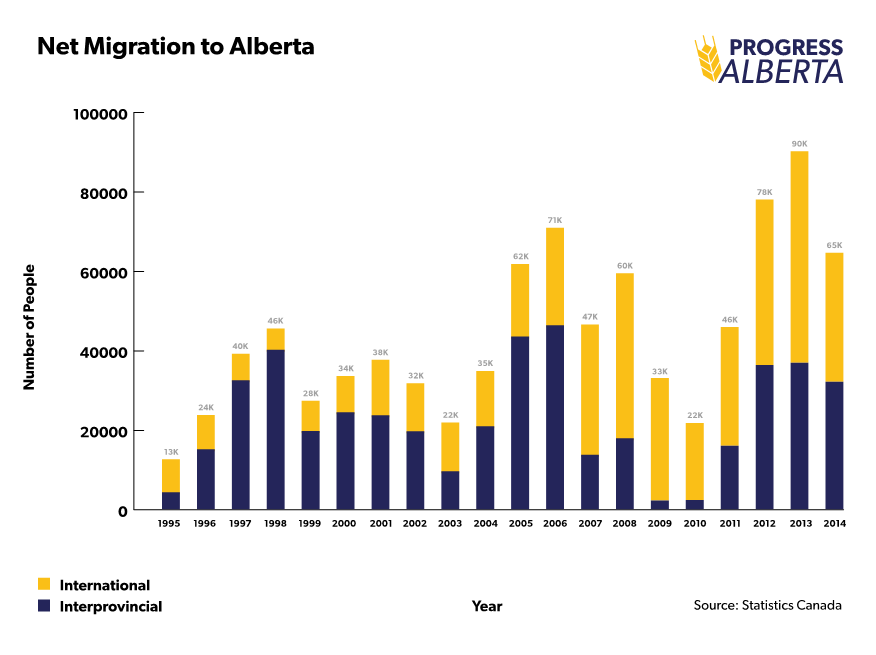 892,000 Albertans have moved here in the past twenty years. That’s 21 per cent of Alberta’s total population.

A city half the size of Calgary, 531,000 people, has moved here in just the past nine years – these new residents totally missed the Ralph Klein era. This massive group of new Albertans is just not connected to traditional conservative Alberta political parties.

These new Albertans means values have changed. The proof is in long term polling data from Lethbridge College. Faron Ellis of the Citizen Society Research Lab has asked the same six questions since 2009 and you can see a genuine movement towards more progressive values.

The Abacus poll also asked people to rank themselves on a 11-point scale, zero being very conservative and 10 being very progressive.

But when Abacus asked where they thought other Albertans fell on this scale, the majority of people overestimate by a wide margin just how conservative their neighbors are.

While Alberta is more progressive than you think there is still an internalized perception amongst Albertans that their province is a conservative place. This simply isn’t correct.

Our neighbors aren’t as conservative as we think.

Our coworkers aren’t as conservative as we think.

And our relatives aren’t as conservative as we think. 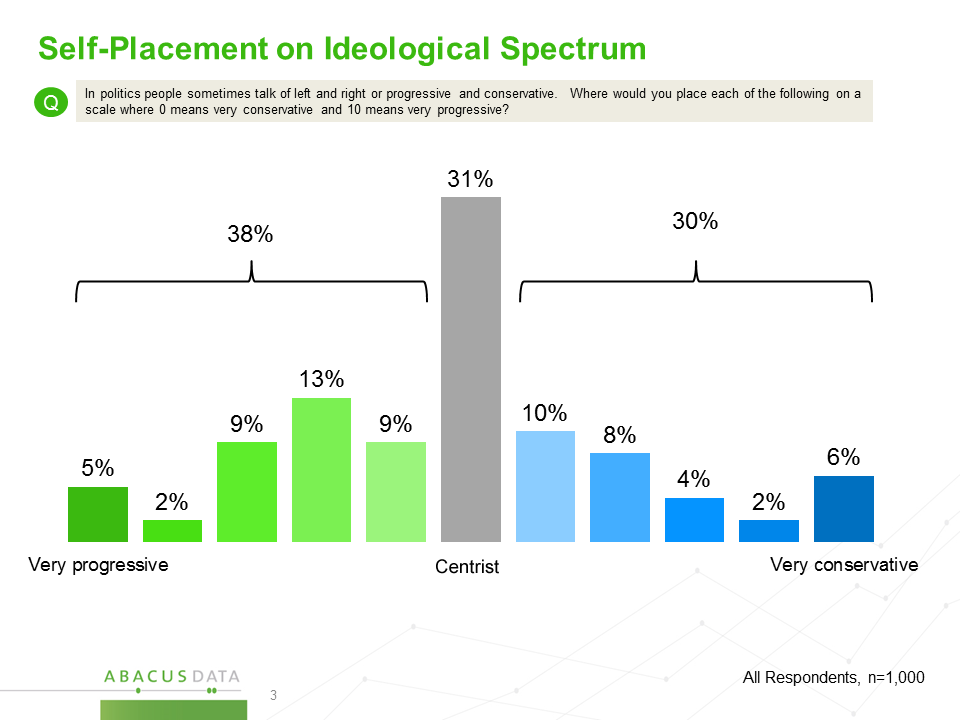 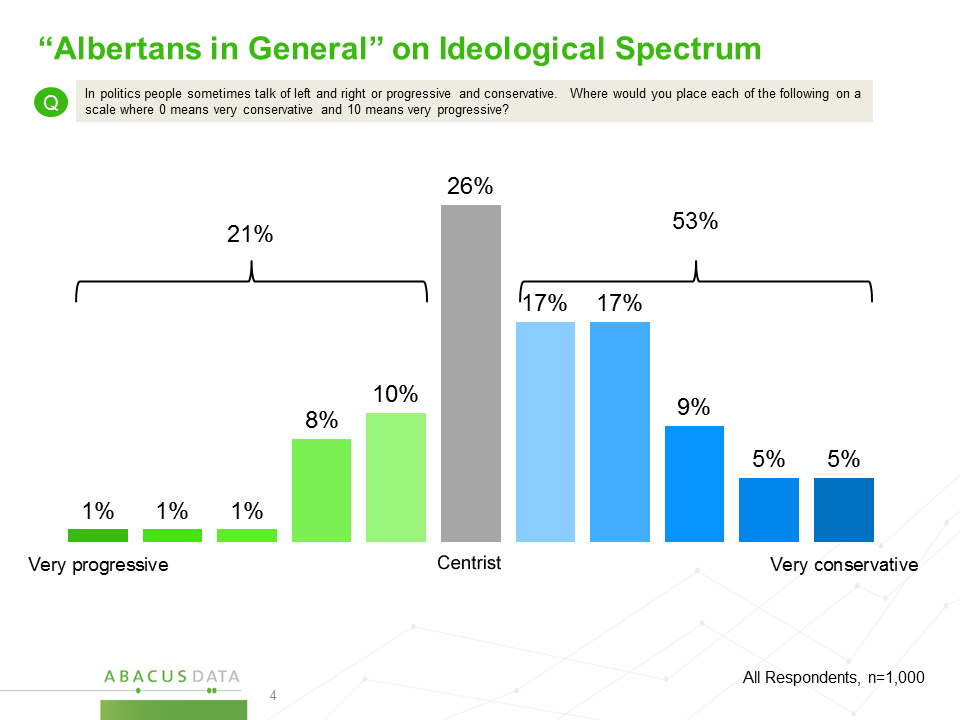 THE POPULARITY OF PROGRESSIVE POLICIES 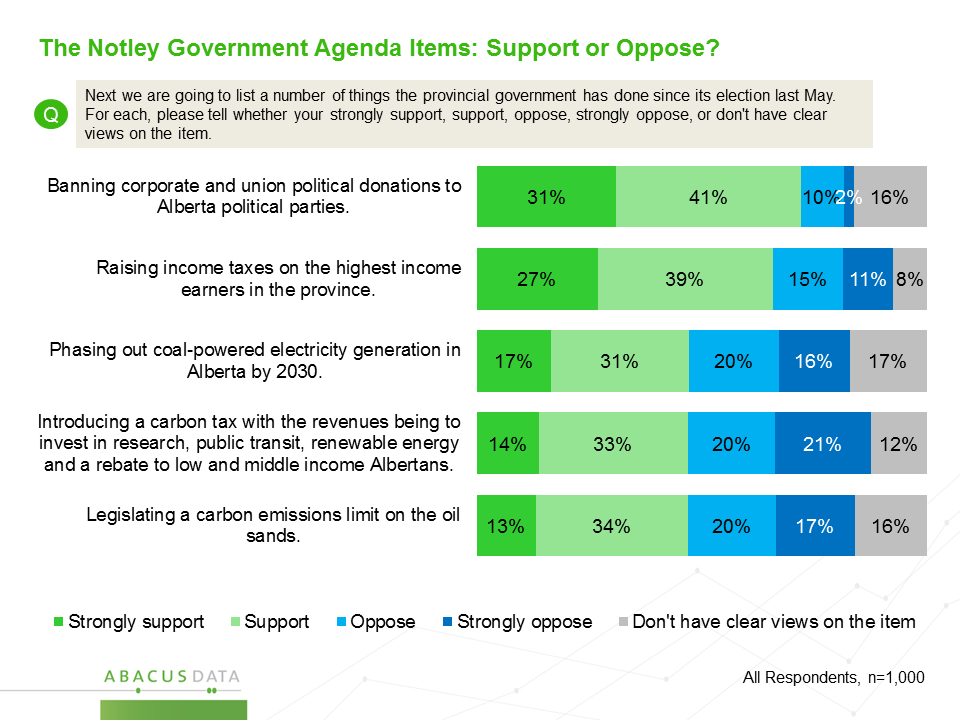 Progressive politicians win elections, progressive policies are popular and the demographic trends are clear: Alberta’s progressives are the majority and will increasingly become so.

Yet progressives in Alberta are still the quiet majority. You wouldn’t know this massive shift had happened if you were going by the tone and tenor of talk radio, political news coverage or op-ed pages. Right wing, anti-climate, free-market lobby groups continue to get a disproportionate amount of news coverage.

Progress Alberta will be a positive, proudly progressive force to ensure more balance in our province’s public debates.

We will help build and organize a stronger progressive movement in Alberta. We will win advances in progressive public policy. And we will generate hard hitting traditional and new media coverage that will shine a spotlight on progressive solutions to Alberta’s real problems.

Alberta’s political identity has changed and it’s changed for the better. It’s time to pull together and build a brighter future for the province that we love.

Does this make sense to you? Do you want to see more content like this? Head to http://www.progressalberta.ca/join and join up!