Even George Clark agrees, it's time to act on payday lending

Even George Clark agrees, it's time to act on payday lending 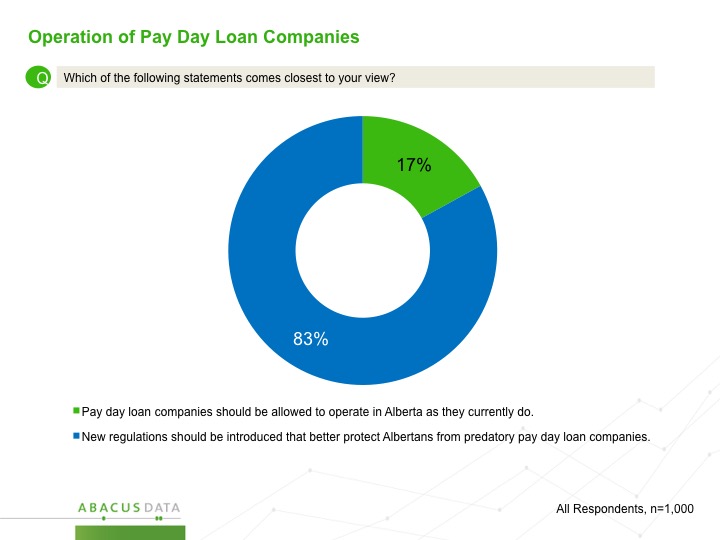 Which of the following statements comes closest to your view?

Statement #1: Payday loan companies should be allowed to operate in Alberta as they currently do - 17 per cent

Conducted back in December this was a held back question from our "Alberta is more progressive than you think," poll conducted by Abacus Data.

When talking about this poll and this op-ed on pending payday lending legislation on Danielle Smith's radio show on Friday, May 20, George Clark, the leader of the infamous #Kudatah movement, called in specifically to voice his support for the legislation.

Based on that and the polling, it looks like we have a broad multi-partisan consensus on this one. Let's better regulate the payday lending industry.

The survey informing this study was conducted online with 1,000 Albertans aged 18 and older from December 2 to 7, 2015. A random sample of panelists was invited to complete the survey from a large representative panel of Albertans recruited and managed by Research Now, one of the world’s leading providers of online research samples.

The Marketing Research and Intelligence Association policy limits statements about margins of sampling error for most online surveys. The margin of error for a comparable probability-based random sample of the same size is +/- 3.1%, 19 times out of 20.

The data were weighted according to census data to ensure that the sample matched Alberta's population according to age, gender, educational attainment, and region. Totals may not add up to 100 due to rounding.