Meet Iron and Earth: A worker led initiative to re-train oilsands workers for the renewable sector

The workers and tradespeople who make up the oilsands sector have been hard hit by the recent oil slump. The International Brotherhood of Electrical Worker's local 424 in Edmonton reports that 44 per cent of its members (approximately 3500 out of 8000) were out of work last month. But a new group that is launching today is aiming to put oilsands workers back to work in the renewable energy sector and are calling on the Alberta government for support.

Iron and Earth is a non-profit led by oilsands workers who want retrain 1000 electrical workers on 100 different solar projects. The governments of Alberta and Canada have made important climate commitments and while certain people and organizations might might see that as a problem Iron and Earth founder and boilermaker Lliam Hildebrand sees it as an economic opportunity.

"Meeting these climate targets will be one of the biggest job creation opportunities for our trades in a long time," says Hildebrand. "Let's get Albertans back to work." 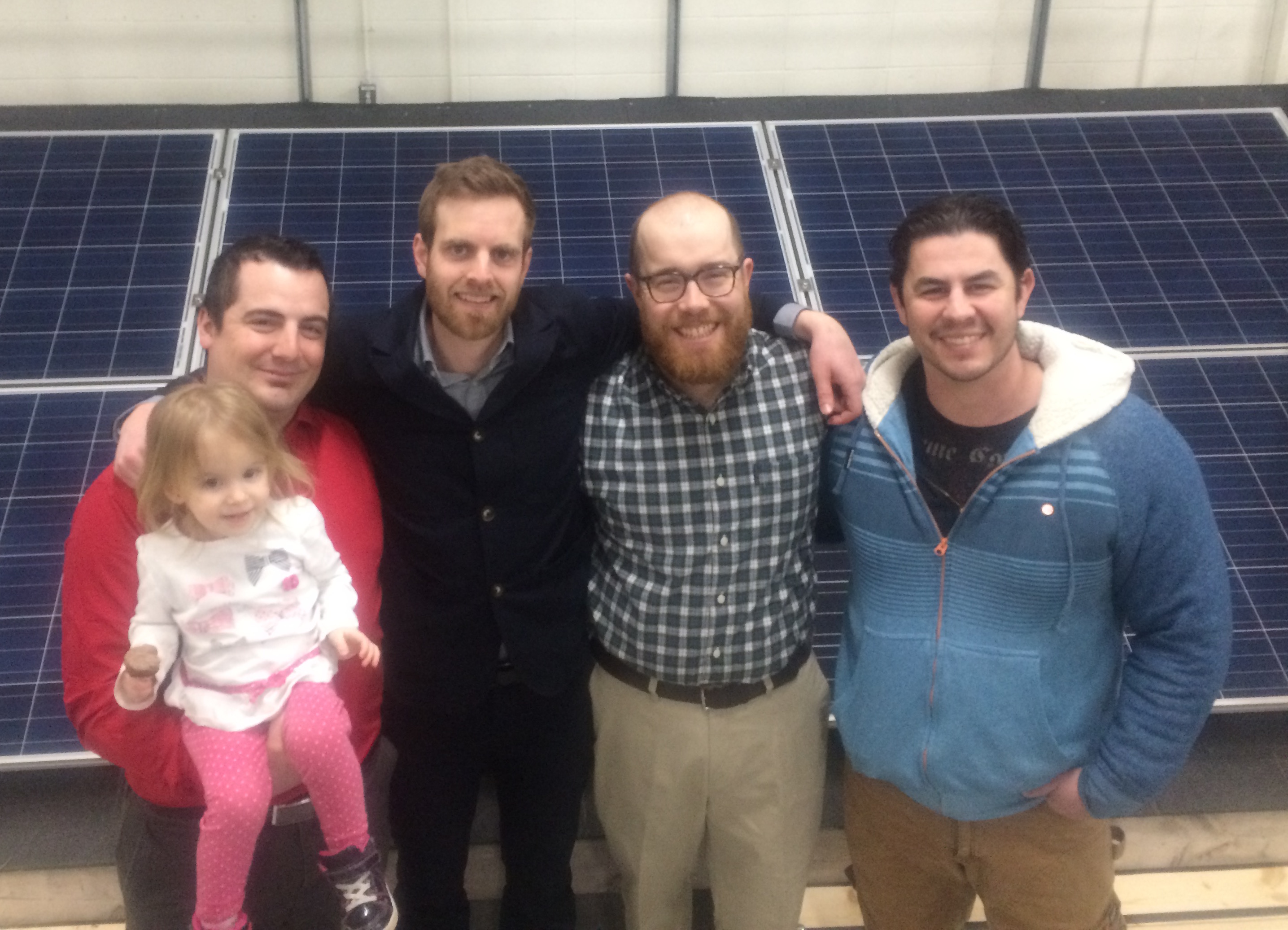 They are developing programs and initiatives to create real opportunities for workers and they are calling on government and industry to do the same. Their first project is this Solar Skills Campaign.

They want to re-train 1000 unemployed Alberta electrical workers as professional solar workers by 2018. They want to do this by installing solar on publicly owned buildings - essentially turning these jobsites into classrooms.

Their first press conference was held at Gridworks in Edmonton, a solar PV installation and training company run by Randall Benson, an ex-oilsands worker and a director with Iron and Earth. Benson was born and raised in the oilsands but he now has 15 years experience in the solar PV industry and has trained nearly 1000 electricians as solar installers and entrepreneurs. 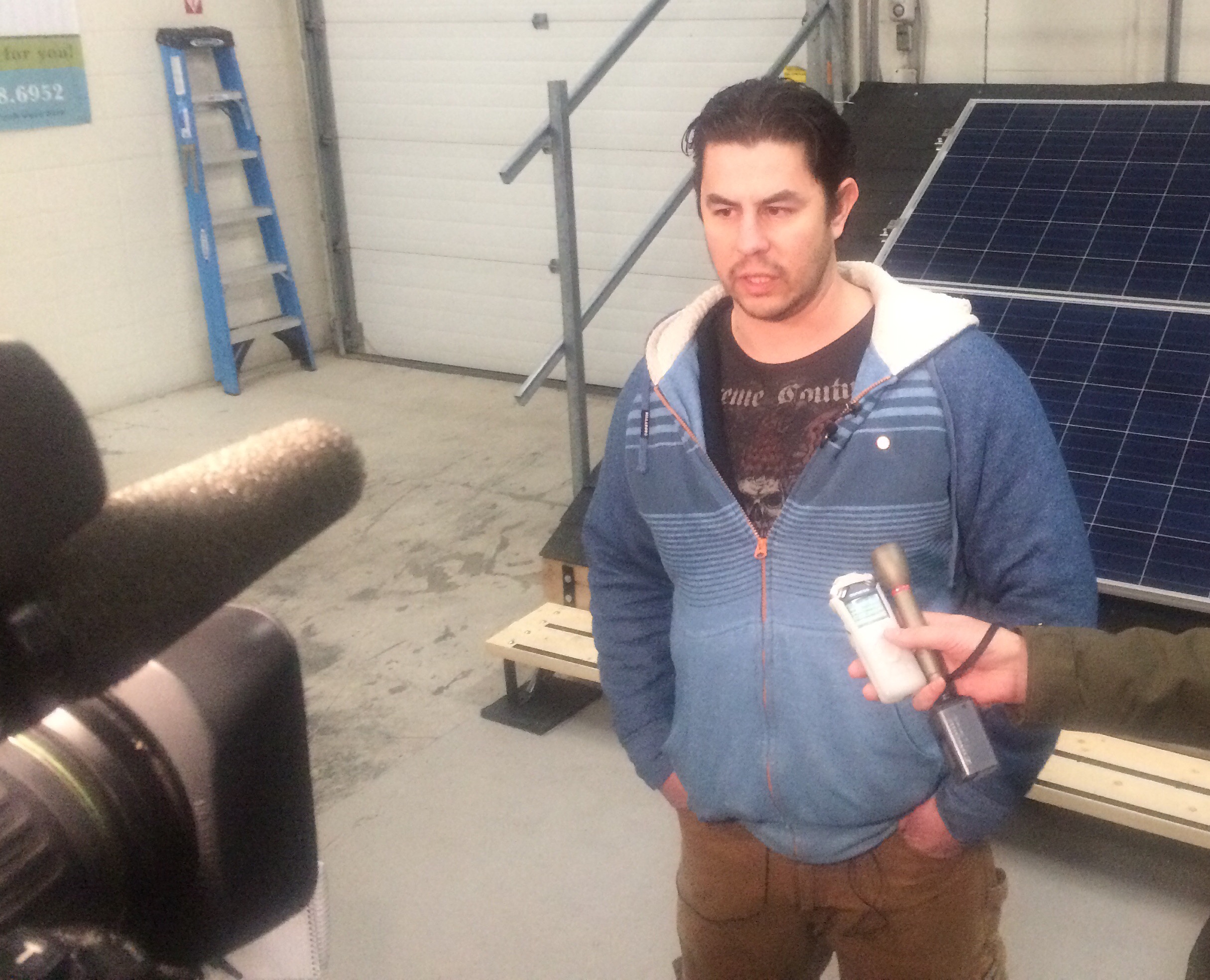 One of those people trained by Benson showed up to the press conference. Dave Pearson is the owner of PV Solar Enterprises and he's a union electrician who started up his own solar PV business. He was recently at the Edmonton Home and Garden show and garnered a ton of leads but he is having real trouble finding trained workers. Until he can find more of those all important trained workers he's heading up to Suncor's Fort Hill's project to put food on his family's table.

Joseph Bacsu is another director with Iron and Earth and a third generation boilermaker who is currently working in the oil and gas sector.

"Iron and Earth sees opportunities in the renewable energy sector that are not subject to the boom and bust cycles of the oilsands. We want to leave a healthy world for our children, but we need jobs, otherwise there will be no food on the table tomorrow," says Bacsu.

And indeed Bascu's two adorable kids, one two and a half years old and the other only a month old, were at the press conference.

But at its core Iron and Earth makes a fundamentally important argument:

The clean energy transition is a massive economic opportunity and the smart and hard working people behind Iron and Earth don't want to be left behind. Full marks to them and we'll be keeping an eye on what they're up to in the future.