Edmonton’s public transit system is about to drastically change.

City administration has presented the Urban Planning Committee with a new transit strategy. It was developed after council had a number of workshops with transit planner and consultant Jarrett Walker from Portland, Oregon and it’s been three years in the making. And the strategy document itself was just released and can be read here.

To drastically simplify Walker’s main arguments: he’s all about getting cities to prioritize higher frequency bus routes and increasing transit ridership as opposed to focusing on more equitable but less frequent bus service to lower ridership routes, typically in outlying areas. While the strategy document is 86 pages long and while there's a lot to like in there, there is one giant flag -- potential privatization.

While providing more buses on fewer routes has its upsides it also creates gaps in public transit service. What’s being proposed to fill these gaps is what we need to be paying attention to.

PILLAR 3: DEVELOP A MARKET RESPONSIVE APPROACH TO TRANSIT NETWORK DESIGN
What this means to customers:
Impacts may also be mitigated by exploring options with private sector transportation services to provide new mobility choices in areas with low demand.

ACTION 3.d. Explore options with other mobility providers (e.g. taxi companies, transportation network companies) to provide service in areas where the level of transit demand is low and/ or where the street network creates difficult transit operating conditions.

Uber and other ridesharing companies have made these sorts of arrangements in small towns and cities like Innisfil, Ontario and Altamonte Springs, Florida but this would be the first time anything like this has come to city as big as Edmonton.

As Colin Horgan lays out in this piece in Maclean’s, if these types of arrangements become popular it’s very easy to envision a downward spiral for public transit.

“Fewer riders for the old-style public transit system would mean lower revenues, leading to degrading infrastructure. Rather than pay for the upkeep on buses and trains as well as for salaries for their many employees, cities might look to cut their losses and either expand the cheaper subsidy option, leaving publicly-funded transit covering only a fraction of the grid it once did, or get out of the transit game entirely, leaving it to private companies to handle. As services are cut, the poorest tier of transit users would either have to use a decaying, even more underfunded system, or may not have a transit option at all.”

There are also massive problems with subsidizing ride sharing companies like Uber beyond privatization.

To make matters worse bus routes have already been cut back and cancelled while we’re still waiting on announcements for improved bus service. Here are 12 pages of bus route cancellations and cutbacks: these cuts all go into effect on July 2, 2017 -- while council will just be starting debate on this subject on July 5th.

The new and improved bus routes that are part of the transit strategy look great but we don't have a timeline for when they'll be implemented.

With a summer break and the municipal election happening in October don’t expect the transit strategy to be finalized before November. Why are bus services being cut with no announced plan to improve service? What’s the timeline here? 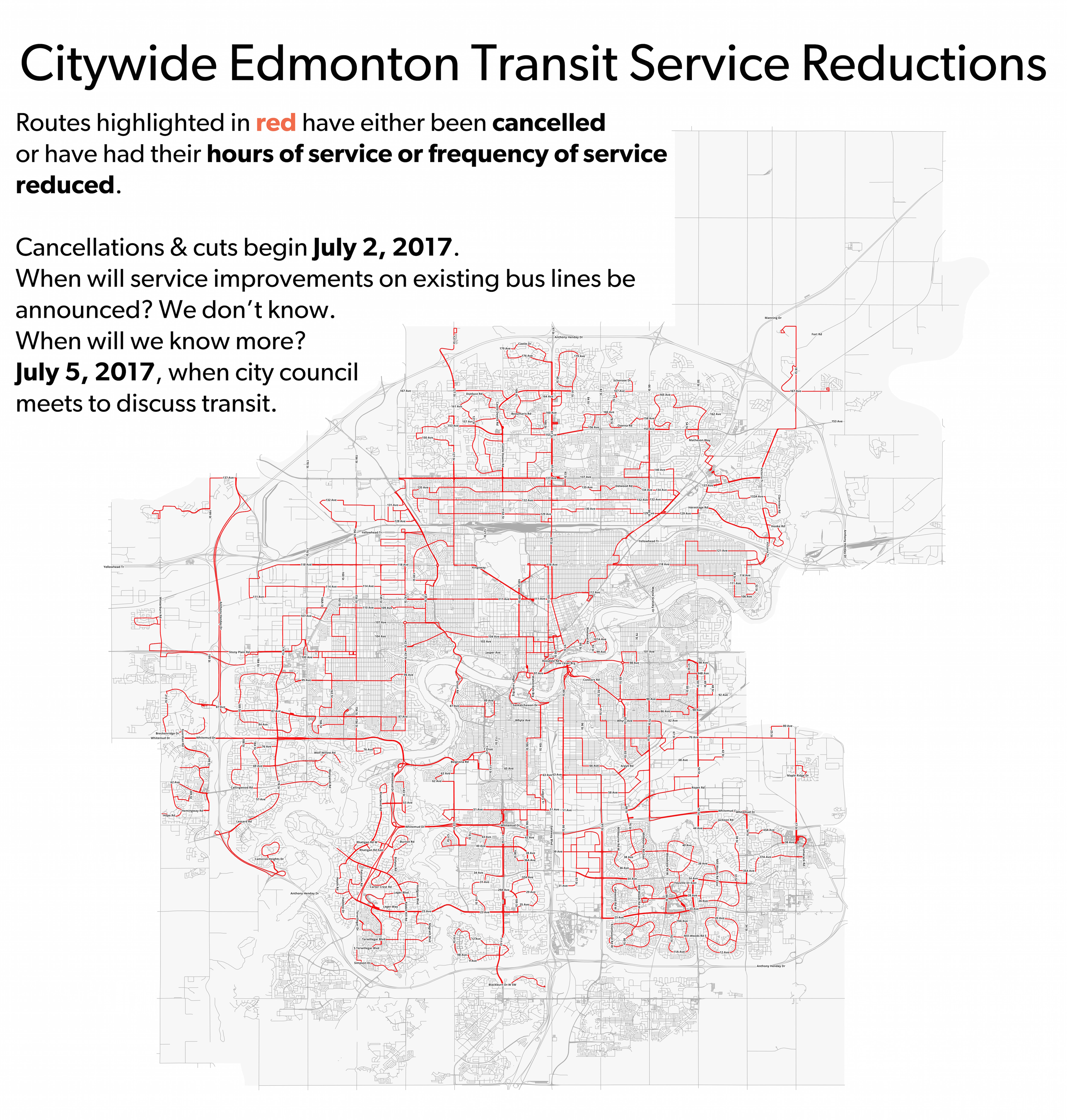 These reductions touch every ward in the city. Take a look at how your neighborhood is getting hit.

There is a better way to do tackle Edmonton's transit problems.

A publicly funded dial-a-bus or dial-a-ride solution is a low tech but effective solution to get people in poorly served areas who might not have smartphones to transit hubs. This option is being used in St. Albert and in Airdrie outside of Calgary.

Bus Rapid Transit or BRT is a cost-effective way to bring high quality public transit to all Edmontonians. With dedicated roadways and LRT-style platforms BRT can provide LRT-comparable transit service to  the city at a fraction of the cost. BRT costs $10 million to $20 million per kilometre to construct. LRT costs $40 million to $50 million per km.

Mayor Iveson needs to get over his aversion to BRT and seriously consider this option to bring higher quality public transit to far more Edmontonians on a much faster timeline. It's not a fringe idea. Councillor Michael Walters and the Edmonton Transit Service Advisory board have both spoken eloquently about the need for the city to embrace BRT. There are poorly-served areas in this city now and north Edmonton can't wait 30 years before they get an LRT.

What's being proposed in the strategy document is just more buses on fewer routes. While precursor BRT is mentioned several times in the transit strategy report, it positions BRT as second class to LRT -- and that's just not true. At the end of the day, without a BRT system, a bus is still just a bus in traffic. In order to increase ridership and provide better service, two stated goals of the transit strategy, we need to make riding the bus easier and faster than driving your car. Bus Rapid Transit does this.

Getting people out of their cars and into public transit  in Edmonton will be no easy task but it’s one that requires all hands on deck and a strong, smart and effective public transit system to boot.

If we chop up and privatize our public transit system we’re not solving the problem -- we're just giving up on it. Sacrificing transit that people rely on to get to work, get into the city, and get to important services isn't the way to go. Instead let's invest in a strong, resilient transit network that serves all of Edmonton -- and let's keep transit public.