Human rights are not optional

With the release of province wide guidelines by Education Minister David Eggen for LGBTQ policy in all of Alberta’s publicly funded schools, it’s worth noting just how far Alberta has come in a generation.

In the 90s, we had PC cabinet minister Stockwell Day talking about how "homosexuality is a mental disorder that can be cured through counselling." Day also opposed offering LGBTQ people some human-rights protection because it "legitimizes a lifestyle choice that doesn't deserve this kind of attention."

Day was a senior cabinet minister with multiple posts over more than seven years.

And while the anti-LGBTQ conservative wedge politics of the 90s were a particularly gross piece of Alberta history we can all take a bit of comfort in where we are now. In a poll conducted by Abacus Data and commissioned by Progress Alberta it's clear that Alberta is now a more progressive place when it comes to LGBTQ issues.

Poll results from Abacus Data show that nearly seven in ten (69%) of respondents felt that the provincial government should ensure public school boards in Alberta create safe learning environments for all, including those within the LGBTQ community. Just 31% felt that such responsibilities should be left to individual school boards. 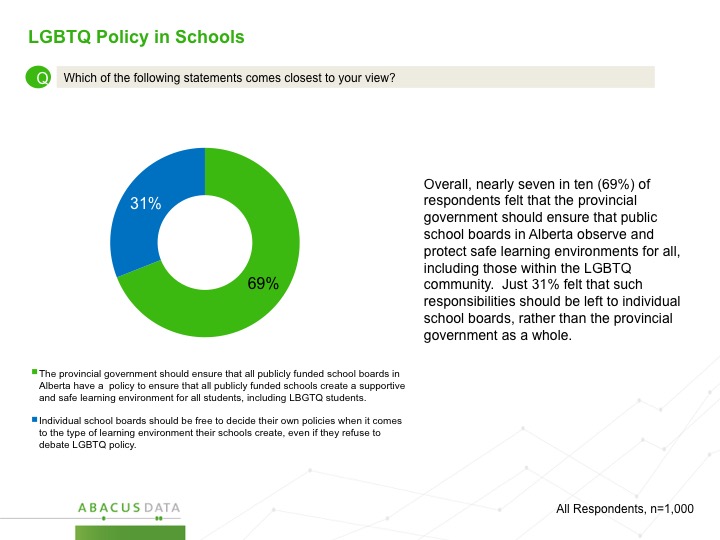 Richard Einarson is an advisory board member with Progress Alberta and spokesperson for Safe Schools Alberta.

“The needs of LGBTQ students, staff and family are no different from one part of the province to the next. An LGBTQ kid in Red Deer doesn't’ need any less or more protection than an LGBTQ kid in Calgary,” says Einarson.

“The purpose of Bill 10 was because we knew certain school boards would not want to allow GSAs and other LGBTQ policy to exist. We need to follow through on the commitment we made with Bill 10 and ensure that every school board has appropriate LGBTQ policy.”

Marni Panas, a transgender woman and LGBTQ advocate, thinks the guidelines are solid and that the government has done their homework.

“These are minimum standards. Everyone in a publicly funded school should have the same expectation for a safe space no matter what school they go to.”

And Albertan values have evolved when it comes to LGBTQ issues. The evidence is in Faron Ellis' polling at the Citizen Society Research Lab at Lethbridge College. They've asked the same six questions since 2009 and one of those questions is support of gay marriage - that number has climbed 16 per cent in the last 6 years to 81.7 per cent.

But what Albertans have made clear is that human rights are not optional. Individual school boards that don't institute the policies outlined by the province are either tolerating or encouraging homophobia. In this day and age that's simply not acceptable. 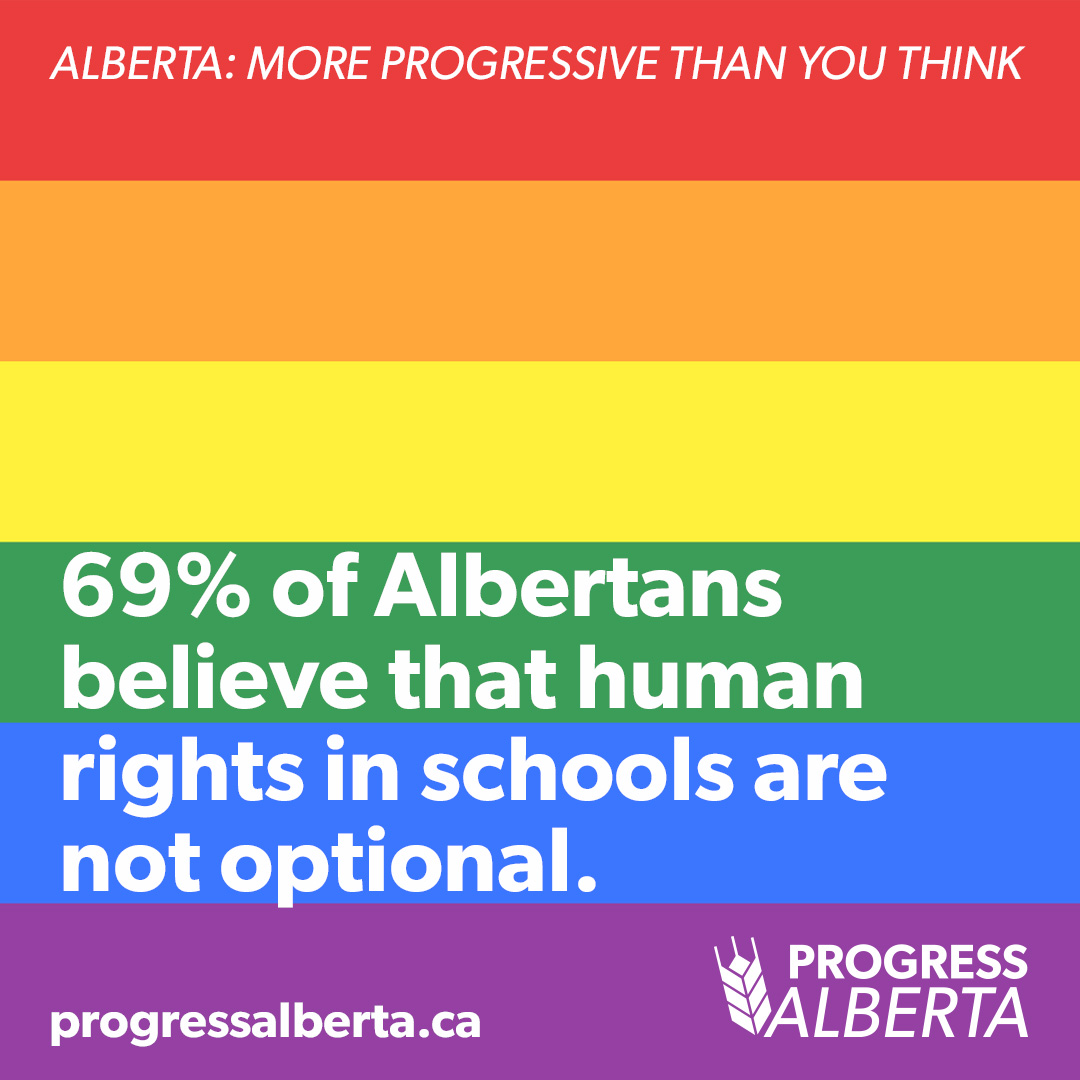 The poll was conducted by Abacus Data, commissioned by Progress Alberta, and ran from Dec. 2 to 7. The online survey polled 1,000 Albertans and the data was weighted by age, gender, education and region. The sample was recruited from Research Now, one of the top providers of online research samples.  The Marketing Research and Intelligence Association policy limits statements about margins of sampling error for most online surveys. The margin of error for a comparable probability-based random sample of the same size is +/- 3.1%, 19 times out of 20. The data were weighted according to census data to ensure that the sample matched Alberta's population according to age, gender, educational attainment, and region. Totals may not add up to 100 due to rounding.