#Kudatah Report: How a right wing rally started off being funny and ended up being scary

Yes Martha, there is still a dark underbelly of racism and homophobia in Alberta 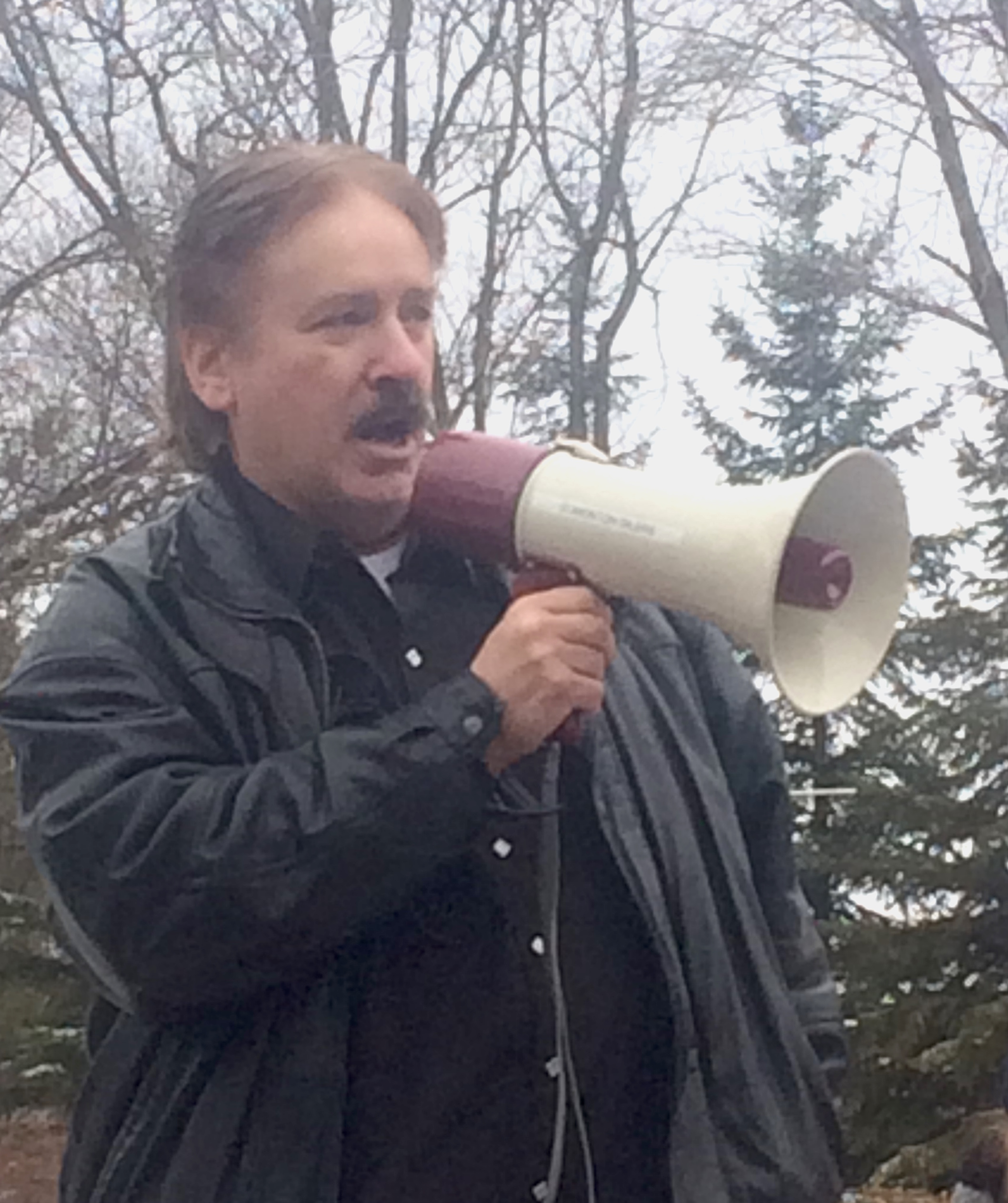 George Clark is pretty easy to laugh off. When he made the the announcement in a Walmart parking lot that he and his comrades were going to take over the NDP party from within I chortled. The political learning curve for Clark and his cronies was already vertical. Getting into the arcane and complex world of internal NDP politics bends that learning curve back on itself where it does a few loopty-loops and then swan dives into an alternate reality black hole where Tom Mulcair is the prime minister of Canada.

But when March 8th rolled around I found myself on the Alberta Legislature grounds with a crowd of a couple hundred overwhelmingly white people gathered for George Clark's glorious revolution. And while it started out as funny by the time it was over it had gotten a little scary.

George Clark and the people who showed up at his rally are the type of people who have never, ever troubled themselves with politics before now and have just now decided, with absolute certainty, that politics matters. These are people just discovering the political part of their brain and whose political ideas and identity haven't evolved since their formative years.

But the people were gathered and a speech was given by Clark. And after an hour and twenty minute speech from your not-so-bright uncle the mask started to slip. Clark went after temporary foreign workers, specifically how no-way, no-how should they become citizens. Especially with true blue, honest Albertans out of work and suffering.

Now this was new if not especially surprising. Before today Clark had stayed on message. He had focused on the farm worker safety bill and the carbon tax. But going after the people who serve us Tim Horton's and clean our hotel rooms? The people who are forced by law to leave this country and can't come back for years after we legally exploit their labour? That's an unfortunate choice and one that has nothing to do with provincial politics.

And the mask dropped even further when it came to LGBTQ children. Apparently in his travels across Alberta Clark kept hearing how badly people wanted to get rid of Bill 10 or as it's otherwise known, "the act to amend the Alberta Bill of Rights to protect our children." This is the bill that allows students to set up gay straight alliances in their schools regardless of how their school administrators feel about them. It's also the basis for a set of LGBTQ guidelines that the education minister is expecting school boards to adopt in the near future.

The trade off between parental rights (a 2009 Ted Morton invention) and the rights of kids to get together after school in a supportive environment and literally save each others lives is a trade-off I make in favour of saving the lives of LGBTQ kids every single time. But hey, at least Clark and his supporters are being up front about what they believe. We still have no idea what the Wildrose or the PCs would do on this issue if they were in charge.

And who could forget the repeated Nazi references. There was this accidental seig heil. (Photo courtesy of Mack Lamoureux) 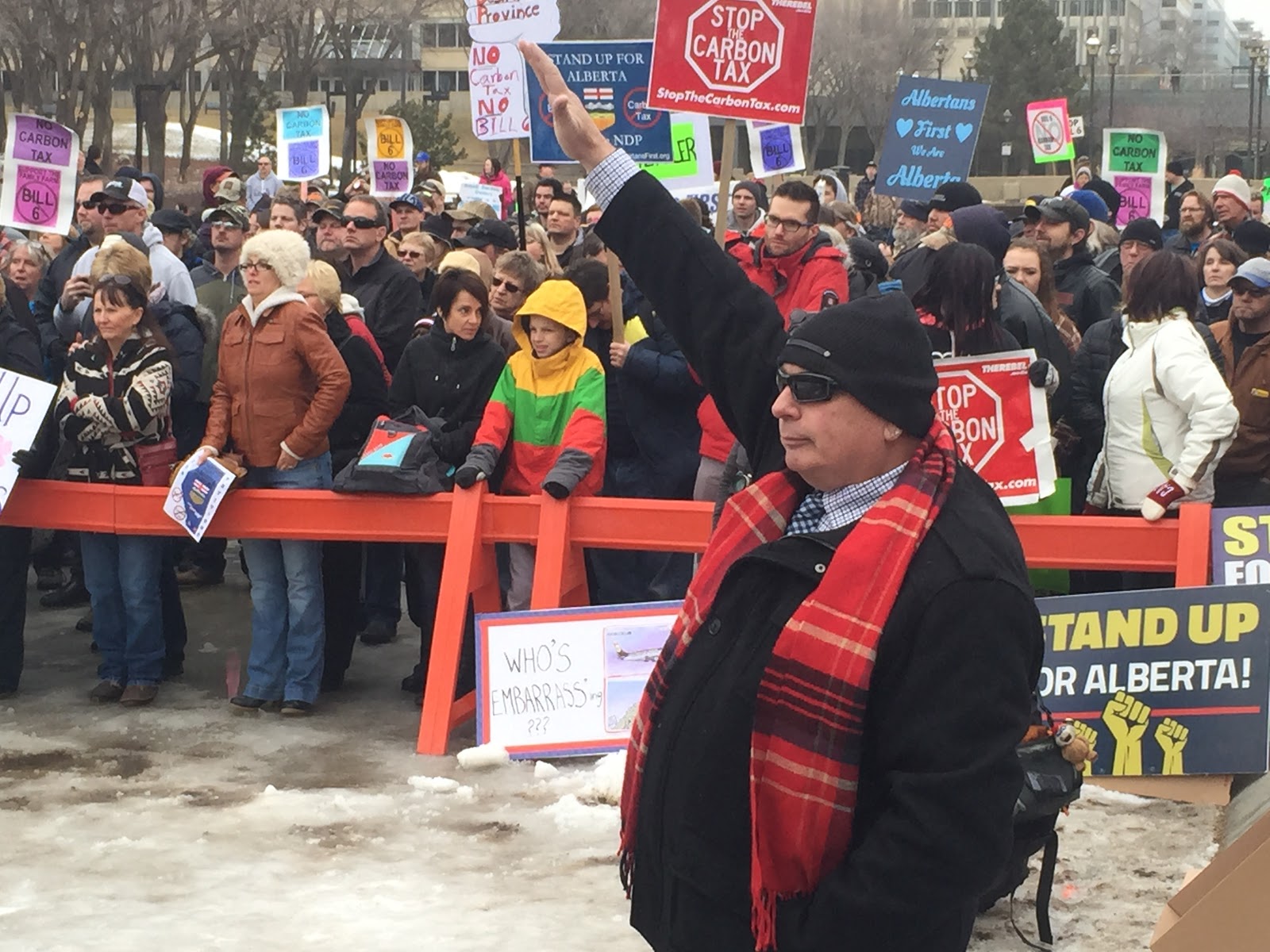 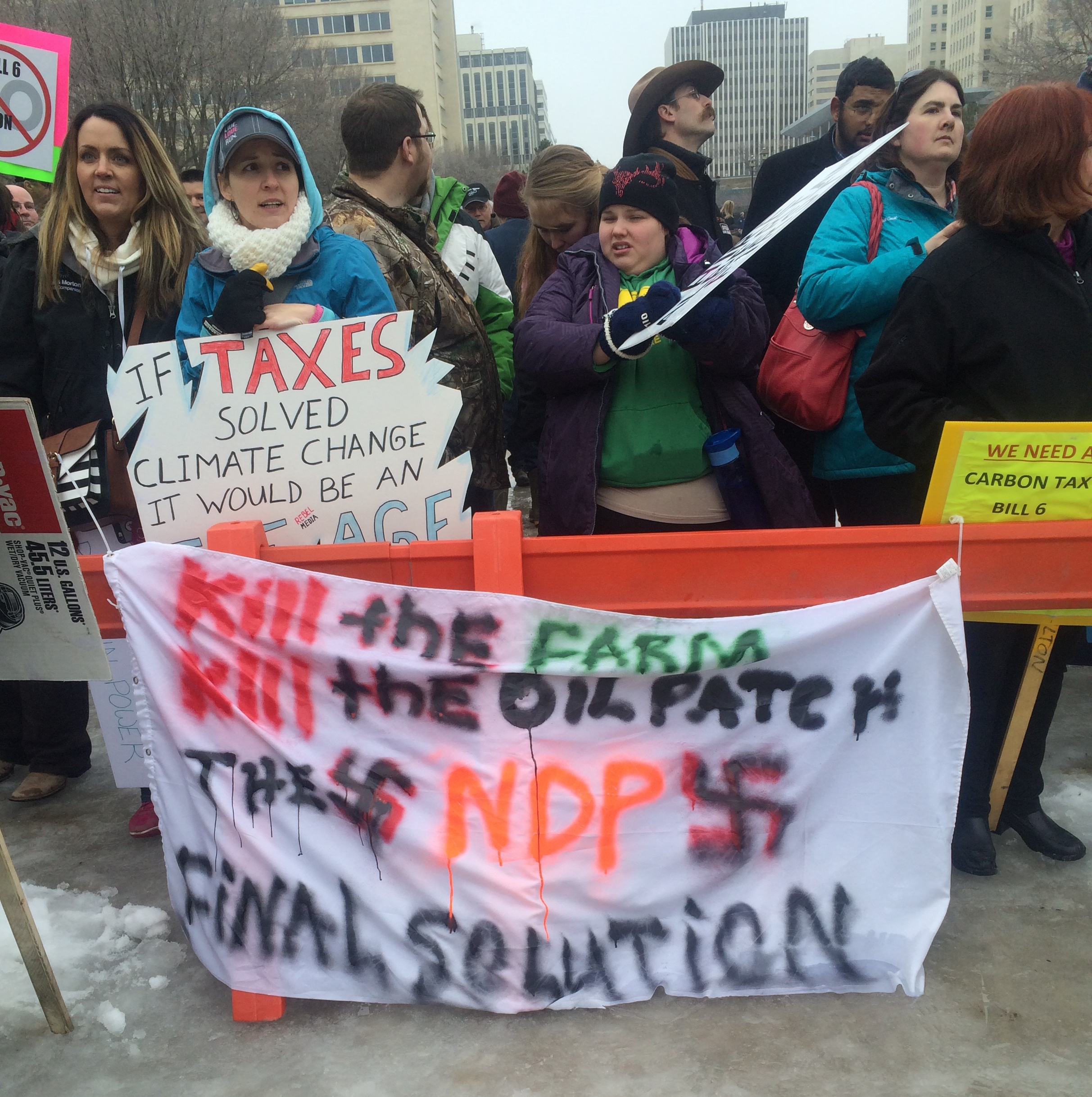 And this quote from George Clark where he equates a certain national socialist party from Germany with the Alberta NDP.

"The world went through a lot of grief to get rid of those brownshirts. Let's hope we don't have to do the same with these orange shirts," said Clark.

Clark is just making it up as he goes along but the fact that he could can attract a crowd who cheer and chant while he goes on about how we shouldn't be giving citizenship to foreigners or that students shouldn't be able to start gay straight alliances is a little scary.

While progressives in Alberta might be the quiet majority there is a decent number of people who identify with Clark's populist message. While it's easy to dismiss it or call the rally weird we need to take this stuff seriously. I don't know what Clark's endgame is and I don't think he knows it either but when the bottom falls out of this movement and people realize they're wasting their time and their money things could get ugly. We need to be prepared for that.

And let's not forget that the Wildrose quietly encouraged Clark. Here he is onstage with Wildrose MLAs Ron Orr, Jason Nixon and Don MacIntyre. 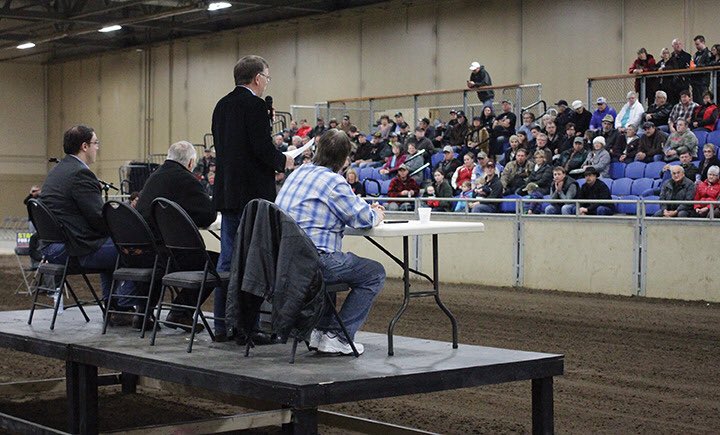 We also had Angela Pitt, a Wildrose MLA, tweeting out her support for George Clark's petitions and a George Clark organizer asking her if she wanted to come out "again" to another petition signing.

While the Wildrose are more than happy to let Clark foment populist rage they're not so hot on letting these people know that their crusade to depose Rachel Notley is ultimately doomed. That's just cynical and it speaks to the kind of conservative politics we have in Alberta at the present moment.

But ultimately George Clark and the cheap and easy brand of populism he represents is a threat. There is still a deep undercurrent of racism and homophobia in this province. We ignore it at our own peril.