Is this Jason Kenney confidant running against him—or for him?

Schweitzer served as Kenney's scrutineer during the PC leadership race

Doug Schweitzer was Jason Kenney’s scrutineer for the official count of ballots that determined the leadership of the PC party. This is a key position—a position only given to someone with the deep, implicit trust of the candidate in order to observe the casting and counting of ballots.

Doug Schweitzer is also running to be the leader of the United Conservative Party against Jason Kenney. 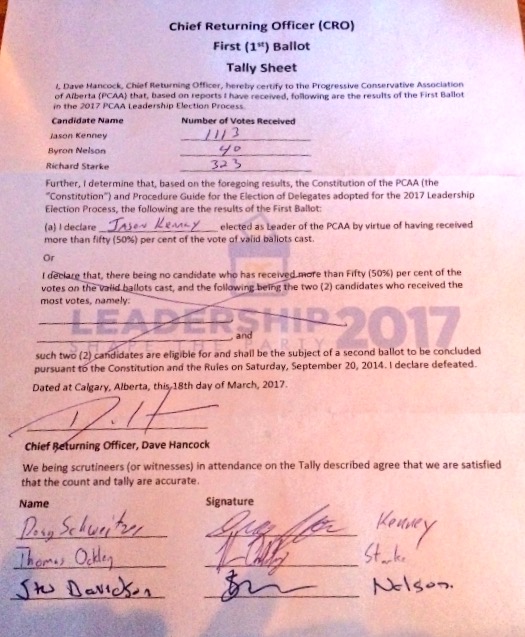 Schweitzer also came very close to running for the leadership of the Progressive Conservative party against Jason Kenney. Though he ended up pulling out at the last minute he had toured and organized around the province.

“In exploring this campaign, we have hosted hundreds of meetings across Alberta, attracted a talented team, and developed campaign infrastructure that is unrivalled. We are ready to launch what we believe is a winning campaign.

However, I am concerned about the Party's commitment to a fair leadership process. In particular, the rules that have been established have raised some serious concerns that go to the legitimacy of the process.”

Here was a man who travelled across the province, who met hundreds of people, who inspired dozens of volunteers to join him and who was so worried about a possibly unfair leadership process that he ended up being the scrutineer and close confidante for the winning candidate.

A winning candidate whose campaign wasn’t exactly above playing fast and loose with the rules. A campaign where senior organizer Alan Hallman (who was later charged with assault at the leadership convention) said the campaign could afford it when told it would be fined for breaking the rules.

So who exactly is Doug Schweitzer? He is a 38 year old corporate lawyer who lives in Calgary. He is the former CEO of the Manitoba wing of the PC party. And he is a man who says one thing and does another.

There are two possible reasons why Doug Schweitzer is running to be leader of the UCP.

Since the first is unlikely at best we can surely speculate that Schweitzer is playing some kind of stalking-horse role here. What that role will entail is unclear but there’s an interesting parallel to what Schweitzer could be doing and Kenney’s old job.

One of Kenney’s duties in Stephen Harper’s government was to placate the social conservative base. To tell them that while yes, Harper won’t be doing anything that they really want on abortion or gay marriage, he’s still ‘their guy’—and that’s coming from Kenney, the most their-guy of Canada’s far-right in Parliament.

In this scenario Schweitzer would be the Harper’s Kenney in reverse. His job would be to placate the people who don’t want schools to out kids that while yes, Kenney certainly does want to do some pretty extreme things on abortions and GSAs, he’s still their guy—a social moderate. And while Schweitzer has actually dared to say things like “social issues” and “GSAs” out loud, appearing socially moderate next to Jean and Kenney isn’t exactly a difficult task.

Perhaps you’re thinking Schweitzer was totally surprised by Kenney’s stance on wanting to out kids who join GSAs to their parents and is running to teach Kenney a lesson. But it’s not like Kenney’s backward stance on LGBTQ rights was some big surprise. My favourite headline illustrating Kenney’s regressive views on LGBTQ rights is the headline from the Calgary Herald that says “Gays can marry - but not each other: Calgary MP.”

And if the UCP election, like most party leadership races, is a runoff vote, then all the better for Mr. Kenney—getting Schweitzer’s votes after he’s knocked off the ballot will give Kenney a good leg up on Jean.

Of course obstinate Wildrosers could scuttle the whole thing and not meet the 75 per cent threshold needed to dissolve the party and start the whole unity process but let’s not get too far ahead of ourselves.

But if and when Schweitzer starts making social moderate cooing noises to the red Tory/Alberta Party types, don’t be too surprised when he says one thing and does another. After all, he’s done it before.