What's worse than making a huge factual error when you run a newspaper? Erasing it and not acknowledging its existence

Unsigned editorials are a quirky holdover from the history of newspapers.

Meant to embody the voice of the publisher the task of writing them is usually taken up by an editorial board. The Calgary Herald recently wrote and released an editorial that had an eye popping mistake in the print version that was later edited out of the web version with no disclosure of the fact.

Running under the headline, "Editorial: NDP won't consult on carbon tax," the piece notes how the government of Alberta goes to great efforts to consult Albertans on wide variety of issues. The extensive consultations happening in regards to marijuana legalization are brought up as an example.

However there is a large discrepancy between the two versions.

The government never campaigned on introducing an economy-wide carbon levy in the 2015 election.

And here's the same passage from the print version and the web before it was edited.

The government never campaigned on introducing an economywide carbon levy in the 2015 election, nor did it consult with the public about what form the tax would take.

Did they think no one would notice?

As you might already be suspecting the government did indeed embark on a massive consultation process on its climate leadership plan, the plan that eventually produced the carbon tax. Here's Environment Minister Shannon Phillip's listing all the ways but here are some excerpts.

Alberta’s climate change advisory panel consulted with Albertans for months. The details of those consultations are readily available on the climate leadership website, and have been for over a year...

Albertans were made aware of public consultations through advertisements that ran in the Calgary Herald, Calgary Sun, Edmonton Journal and Edmonton Sun on Monday, Aug. 31.

More than 25,000 responses were collected through the climate change online survey, which was open from Aug. 14 to Sept. 18, 2015, while almost 1,000 people attended the climate change advisory panel’s two public open houses in Edmonton and Calgary.

The panel received 535 submissions from a varied group of interested stakeholders, including members of the general public, industry, non-governmental organizations and academic experts. Almost 60 per cent of submissions came from individuals.

Editorials are opinion pieces. But just because editorials are opinion pieces does not mean you get make up your own facts. We should all expect that the editorial writer has their facts straight. By any reasonable standard of evidence the government of Alberta consulted extensively with the Alberta public on what form the carbon tax would take. Yet instead of acknowledging their error they chose to hide it. To make it disappear and hope no one would notice.

Well someone did notice. Professor Andrew Leach is an economist at the University of Alberta and was the chair of Alberta's Climate Change Advisory Panel. He said on Twitter that he looked forward to a "correction of this complete falsehood," and called it an absolute embarrassment. Later after seeing the online version had changed he posted this.

It appears that the @calgaryherald have changed their GHG tax editorial to remove a blatantly untrue statetement without noting the change.

So, I hope @calgaryherald will do the right thing and note that their editorial AB GHG tax contained statements not supported by reality.

The chances of a correction seem miniscule. This is the third time in two weeks that a Postmedia property in Alberta has either committed a breach of basic journalistic ethics or made a massive factual error and refused to do anything about it.

This is unacceptable. Click here to sign our Postmedia Petition to demand a correction. Newspapers only work if regular people can trust that they're making an honest attempt to tell the truth. That hasn't happened here. We need to send Postmedia a message.

UPDATE #2: The headline has been changed and a slight edit has been made to the editor's note. It now reads: "This editorial and headline were revised to clarify the editorial board’s position." What exactly was revised and what was clarified is again, not made clear. 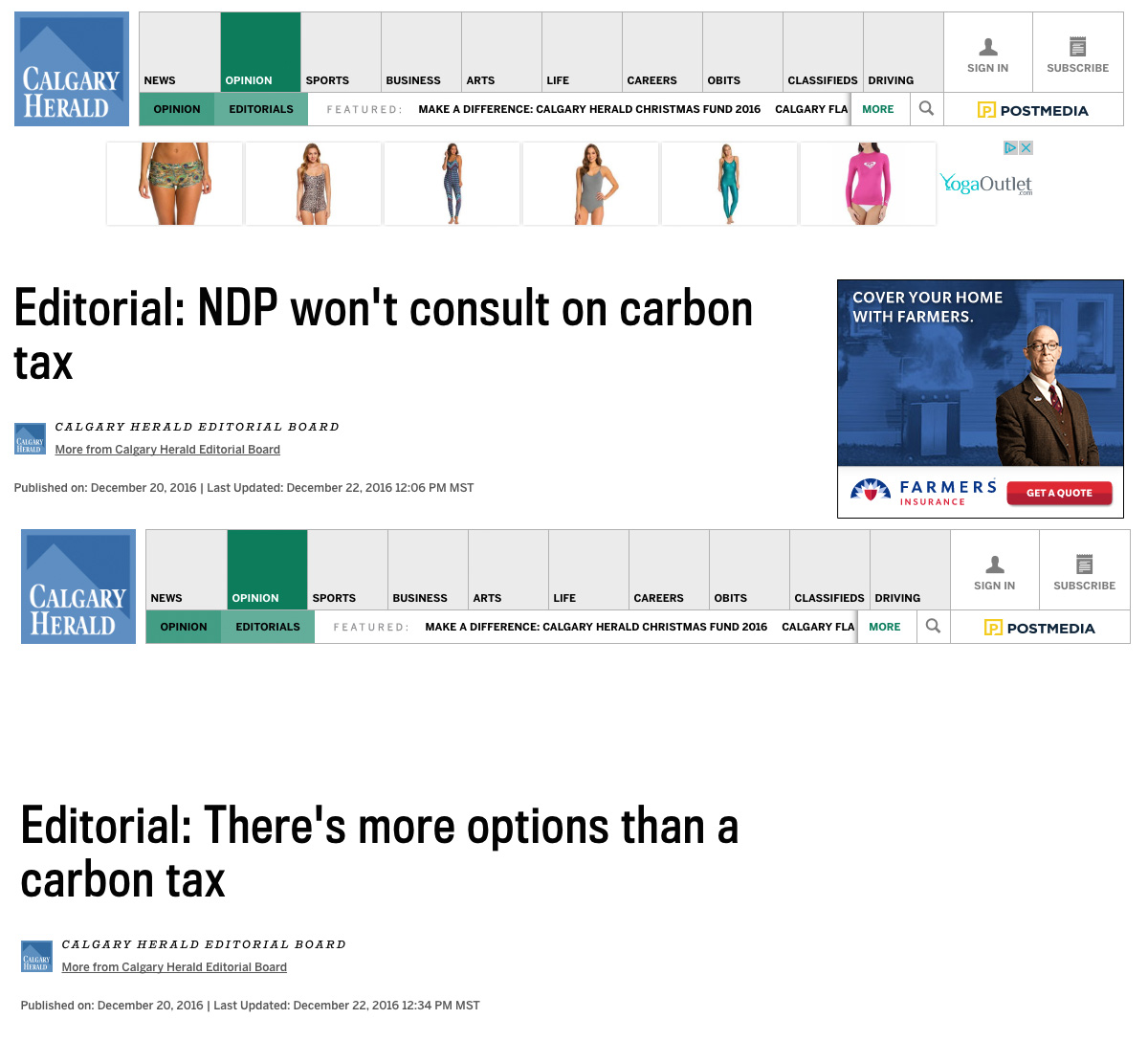