We debunk the latest crazy and wrong anti-LGBTQ guideline pamphlet

Alberta's conservatives have been conspicuously silent on the LGBTQ guidelines. When will they break their silence?

It's worse than you think

It's important that all of Alberta see the misinformation and hysteria that is being put out there by opponents of the province's LBGTQ guidelines. You can download the PDFs here and here. 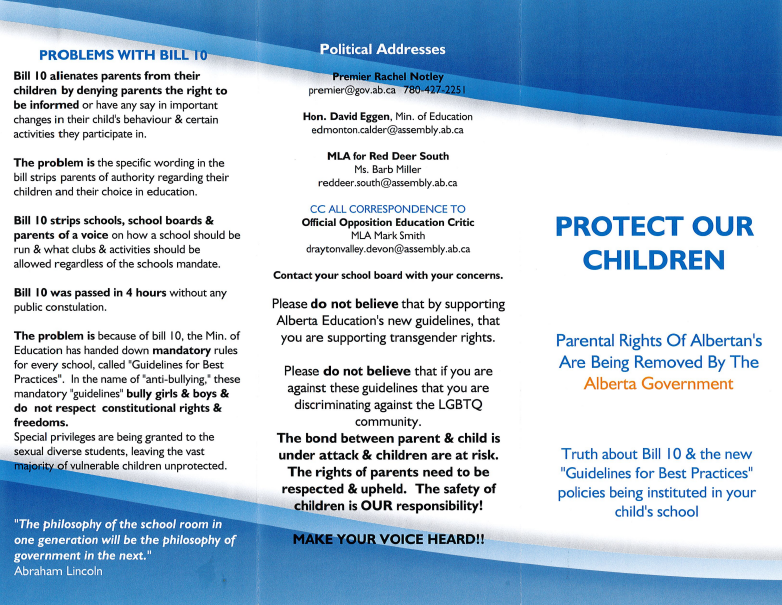 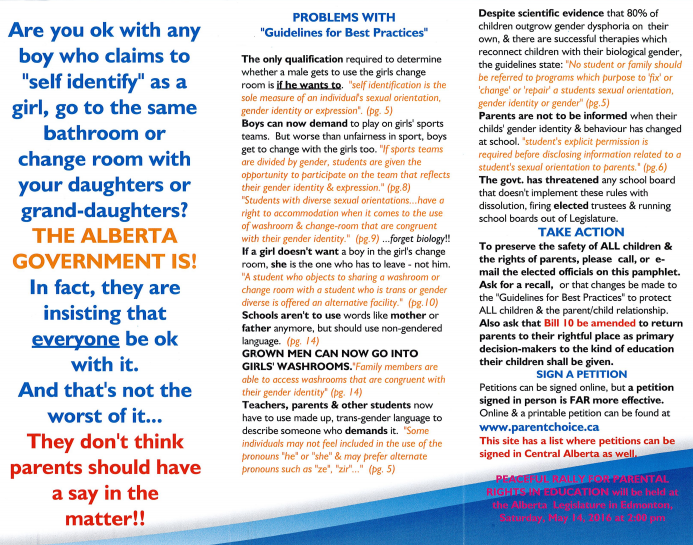 So we're not going to fisk this entire thing. That would be a waste of time but let's deal with the bigger, underlying narratives that this campaign and other similar ones are putting out there.

So if Bill 10 is the worst thing ever why did the government pass it into law?

We passed Bill 10 to ensure that students and staff are provided with welcoming, caring, respectful and safe learning environments that respect diversity and foster a sense of belonging.

What is all this "boys pretending to be girls just so they can go in girls change room or bathroom" business?

Bathrooms and changerooms are one of the biggest sources of anxiety for transgender people. Addressing this issue is important but as you can see it's something the anti-LGBTQ campaigners have latched onto.

The information for these two answers came from the excellent site http://understandingtheguidelines.ca/.

But what about parental rights?

In this excellent 2009 Paula Simons story she lays out where this phrase and concept originated from. Turns out it came from Ted Morton, a dude who doesn't bat an eyelash talking about the "gay-feminist project" or the "feminist-gay gospel."

Can you believe he was a longtime senior cabinet minister and came with a few thousand votes of becoming the premier of Alberta under the PCs? Anyways it was Ted Morton who "bootlegged" the term into our Human Rights Act in 2009. It's unclear to me exactly what parental rights enshrine beyond the ability of parents to teach their children to be just as discriminatory and hateful as themselves. But regardless Bill 10 does not take away the rights of parents to do anything in regards to parenting their child. It allows students to set up supportive after school clubs called gay straight alliances that literally save lives. And the implementation of Bill 10 was the propulsive force behind getting these LGBTQ guidelines into Alberta's education system.

The people who put this pamphlet together also seem be in favour of schools outing their students to parents and conversion therapy. You might know conversion therapy as a practice that attempts to cure people of being gay. In an excellent decision the Ontario government banned the practice of conversion therapy on its youth with a law passed in 2015.

Where do we go from here?

The deadline for school boards to meet these LGBTQ guidelines is March 31st. This group and groups like it are sure to ratchet up the rhetoric as the deadline approaches.

The leaders of Alberta conservative parties in Alberta have also been conspicuously silent on the LGBTQ guidelines even though Bill 10 received near unanimous support when it was voted on in the legislature (though the PC caucus did issue a supportive press release on the LGBTQ guidelines). Brian Jean has famously avoided any and all social issues. "We are not about social issues nor do we want to tackle social issues," is a direct quote. Wildrose finance critic Derek Fildebrandt also said out loud that these debates were stale and that he had 100 other reasons why he ran for office. Ric McIver hasn't said a thing.

How long will their silence last? How long can they ignore the safety and well being of LGBTQ students? I suppose we'll find out.

Albertans did amazing work forcing the PC government to pass Bill 10 but we can't stop now. The work has only just begun. We are planning our own pro-LGBTQ guidelines campaign. Join Progress Alberta and we'll let you know when we need your help.

Correction: Added the link about the PC caucus issuing a supportive press release on the LGBTQ guidelines. Changed focus to leaders. Added sentence on Ric McIver.