The Alberta Party lurches to the right

Under Stephen Mandel, the Alberta Party is pivoting more and more to the right wing

If you’ve been looking at the Alberta Party as a home for centre-left voters, you need to know about their recent right-wing shift.

Historically the Alberta Party was explicitly right-wing--formed in the early 80s to unite fringe right-wing and separatist parties that were opposed to Peter Lougheed. But after much of their membership left to join the more successful Wildrose Party the Alberta Party threw out its old policy book in 2010 and aimed for a more moderate position. Under Glenn Taylor and later Greg Clark the Alberta Party sought to establish itself as a ‘centrist’ alternative to the PCs.

Now party leader and ex-PC cabinet minister Stephen Mandel appears to be throwing that strategy out the window.

While members of his caucus have stood up in the Legislature to defend gay-straight alliances and the government’s Bill 24 (An Act to Support Gay-Straight Alliances) Mandel is now quietly meeting with Parents for Choice in Education, the most aggressive, largest and most-organized opponents of GSAs in Alberta. 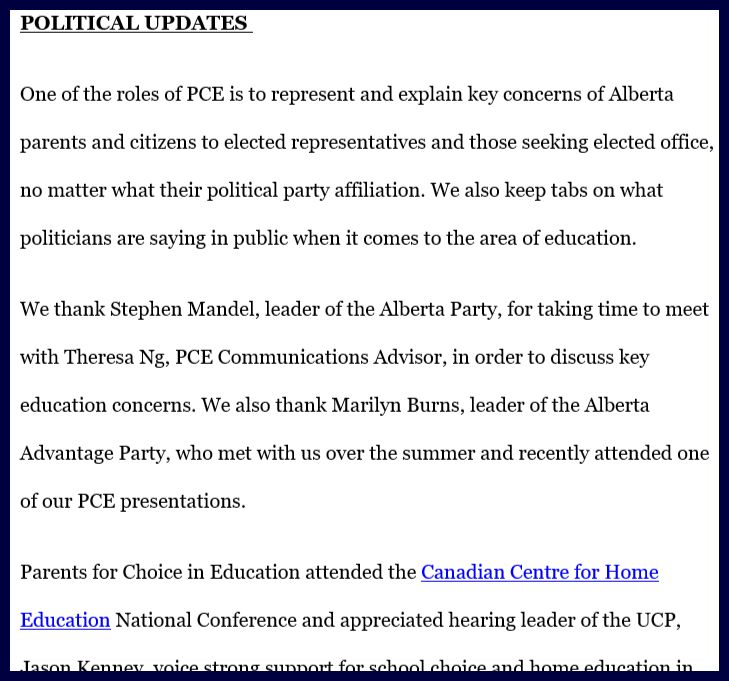 Theresa Ng, the PCE communications advisor referenced in the PCE newsletter, runs the blog Informed Albertans which has been a clearing-house for anti-GSA messaging for years. Ng and PCE have attacked GSAs since the moment they became a political issue in Alberta and have pushed politicians like Jason Kenney into taking up the cause as well.

When the UCP argued against Bill 24 in the Legislature in 2017--a position they now try to downplay, given how much the public loathes attacks on LGBTQ2 youth--it was Theresa Ng’s messaging that they they used.

Ng and Parents for Choice in Education are closely aligned with the UCP and participated in the UCP founding convention earlier this year, where they were able to get many of their preferred policies into the official UCP policy book. Some of those policies were about maintaining or increasing funding to private schools, but resolutions #7, #25, #26, #79, #81, #105 and #151 are coded attacks on the GSA law. 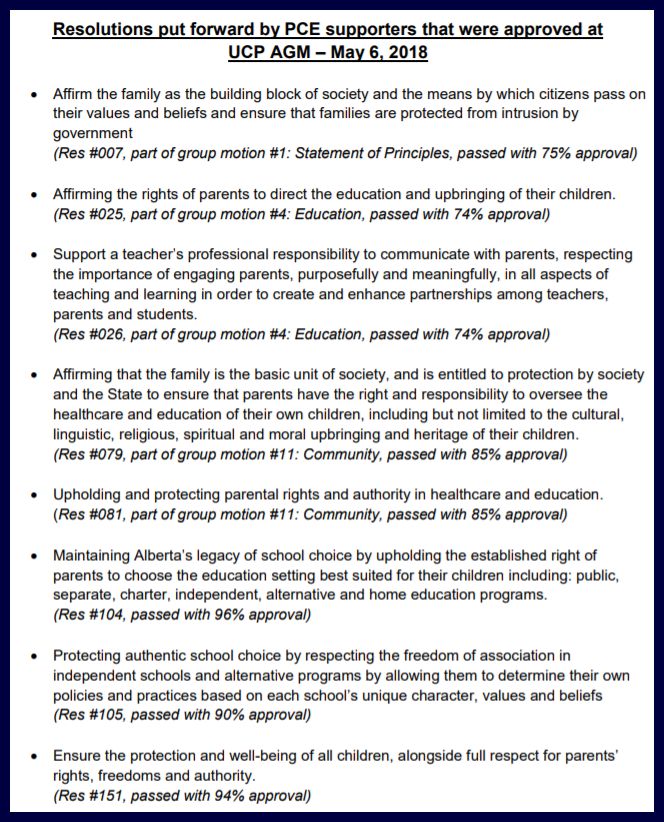 Cozying up to anti-GSA lobbyists isn’t the only gesture that Stephen Mandel has made recently to demonstrate his rightward shift. On October 1st, around 300,000 Albertans received a raise as the minimum wage was increased to $15 an hour, and pro-low-wage lobbyists have been predictably howling about it. One line of attack they’re using is to suggest a two-tier wage system--to cut $1/hr from the pay of young workers and food service workers.

Mandel has picked up that line and the Alberta Party is now using it--putting them further on the right with regards to minimum wage than even Jason Kenney, who has said he won’t roll the minimum wage increase back.

You could look also to Mandel’s stance on the climate plan, which appears to be edging to the right and away from the historical Alberta Party position. Though the Alberta Party haven’t been the most strident supporters of the NDP government’s climate plan, they did support carbon pricing--with the caveat that they wanted less of the carbon tax being rebated to the poor.

But now Mandel is attacking the climate plan, urging Premier Notley to suspend the carbon tax entirely. Never mind that the federal government has the authority to impose its own carbon price on Alberta, or that additional belligerence is unlikely to help a pipeline project that has already been tripped up by over-politicization--Mandel has taken a page right out of the messaging binders of the climate-denial PACs.

Over the years the Alberta Party has been all over the map, policy-wise, and it’s understandable that there are still many involved with or supporting them who believe them to be a vehicle for centre-left, moderate policy. But with Stephen Mandel in the driver’s seat, they’re turning down a different road.

Make your own decision about whom to lend your vote in 2019. But if you’re looking for a party that passionately supports LGBTQ Albertans, the working class, and thoughtful climate action, this ain’t it, chief.

For updates and analysis on Alberta's political happenings, sign up for the Progress Report--our weekly email newsletter--with the form on this page.