One of the most popular arguments made by private school proponents in response to campaigns like ours is that private schools are actually “saving the government money.”

Here’s the supposed logic: private schools receive 70 per cent of the per-student funding the public, separate and Francophone schools do. The remaining 30 per cent—and any extras—come directly from the parents. And private schools don’t receive funding for capital projects.

But there’s one part they never tell you.

Many private schools offer federal tax receipts for tuition, either under the guise of religious education or childcare. That means that wealthy parents are receiving big rewards from the federal government for sending their kids to private schools that most families will never afford.

We’re not only subsidizing them through direct provincial payments, but also through giving them federal tax breaks (which are reported in the annual charity listings at Canadian Revenue Agency).

Here are a few examples.

In 2016, Glenmore Christian Academy — an 871-student private school in Calgary that charges up to $6,810 per student — registered $2 million in tax-receipted tuition fees. The school’s last three-year plan indicated that it receives $4.7 million from tuition and another $4.6 million from the province. Over 40 per cent of Glenmore’s tuition was refunded to parents in the form of tax receipts.

As a private school, Glenmore already receives government funding on a per-student basis of 70 per cent compared to public schools. But when we combine that amount with what parents receive in tax receipts, that means the public is covering not just those subsidies but 70 per cent of the school’s entire instructional revenue, either by direct funding or tax breaks.

Or take Bearspaw Christian Academy, also located in Calgary. The 769-student school charges up to $7,450 in tuition. But in 2016, it logged $1.4 million in tax-receipted tuition fees. That same year, it received a total of $3.5 million in tuition fees, meaning that 40 per cent of its tuition was also effectively refunded. Add that up with the $3.7 million in received from the Alberta government, and it also comes to about 70 per cent from public funding.

As you may have noticed, both of these examples are Christian schools. That tends to be the norm. In 2016, Calvin Christian School in Coalridge registered $1.3 million in tax receipts, while Airdrie’s Koinonia Christian School reported $950,000.

But that’s not the end of it.

For unknown reasons, Lycée Louis Pasteur — which charges up to $14,600 per year for tuition, making it one of Alberta’s 17 elite private schools — registered $2.2 million in tax receipts in 2016. While the explicitly non-denominational school didn’t report the amount that it received in tuition from parents, calculations indicate that it was around $4.7 million. That means almost half of the elite school’s tuition was designated as eligible for tax receipts.

We reached out to Lycée Louis Pasteur for an explanation but by the time of publication of this article, they have yet to respond.

A number of other elite private schools indicate that there are tax receipts accessible for parents under the category of “child care.”

In 2016, the National Observer’s Sandy Garossino discovered that an elite private school in Vancouver was marketing to parents the potential eligibility of $3,800 per student in tax deductible expenses relating to childcare, up to the age of 16.

Here’s how Garossino put it at the time: “All parents of private school students in B.C.—in fact across Canada—can claim a child-care deduction for a portion of their private school tuition. We’re talking tens of thousands of elite private school kids getting a free lunch on the public dime.”

The same is happening in Alberta.

In 2010, Webber Academy (one of the most elite private schools in Alberta) told parents in a newsletter that they can claim 50 per cent of kindergarten and 25 per cent of Grades 1 to 10 tuition for students up to the age of 16. At the time, that worked out to between $3,500 and $7,000 in tax subsidies per year. While Webber doesn’t appear to publicly list the percentages anymore, it continues to tell parents of the opportunity in its annual handbook. 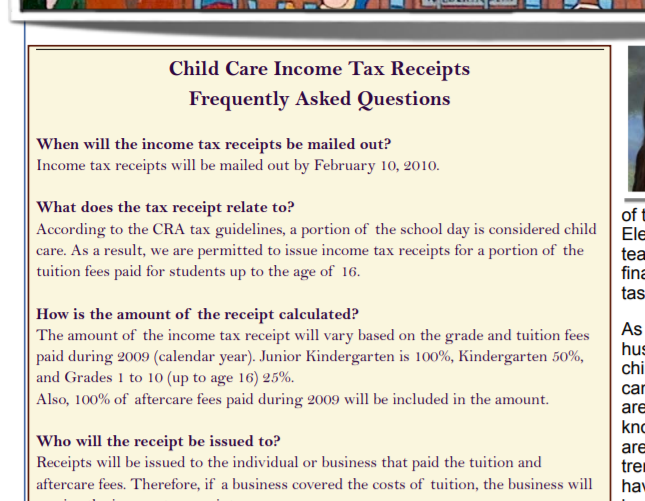 Private schools aren’t “saving us” money. In fact, they’re double dipping! First with government funding, and then with tax receipts for much of the remainder. They’re being subsidized by both the province and federal government. Which, of course, means that the rest of us are helping pay for rich parents to isolate their kids in metaphorical (but sometimes literal) gated schools, so they don’t have to interact with regular Albertan kids.

Three-quarters of Albertans already support the defunding of elite private schools — the same percentage of people who support the construction of the Kinder Morgan pipeline. We now know that rich parents are getting an even bigger break due to tax deductions that the rest of us pay for. This can’t go on anymore.