A new poll from Environics on the issue of publicly funding private schools shows widespread support and positive momentum for defunding elite private schools and shifting funding to the public education system.

Three out of four Albertans, 75 per cent, agree that schools charging more than $10,000 per year in tuition should not receive public funding.

And it turns out that defunding elite private schools is just as popular with Albertans as pipelines. Polling done by Abacus Data in September, 2017 shows that the same amount of Albertans support the construction of Kinder Morgan's Trans Mountain pipeline expansion.

If you agree that elite private schools need to get off the gravy train of public subsidies show your support by emailing your MLA. Given that such overwhelming majority of Albertans support stopping the unfair practice of subsidizing private schools that charge up to $26,000 a year let's give this government the encouragement it needs to act on this issue.

There are 17 elite private schools in Alberta (you can read about them here and here) and together these schools received $29.1 million in government subsidies in 2016-2017.

You can download the whole report from Environics here. 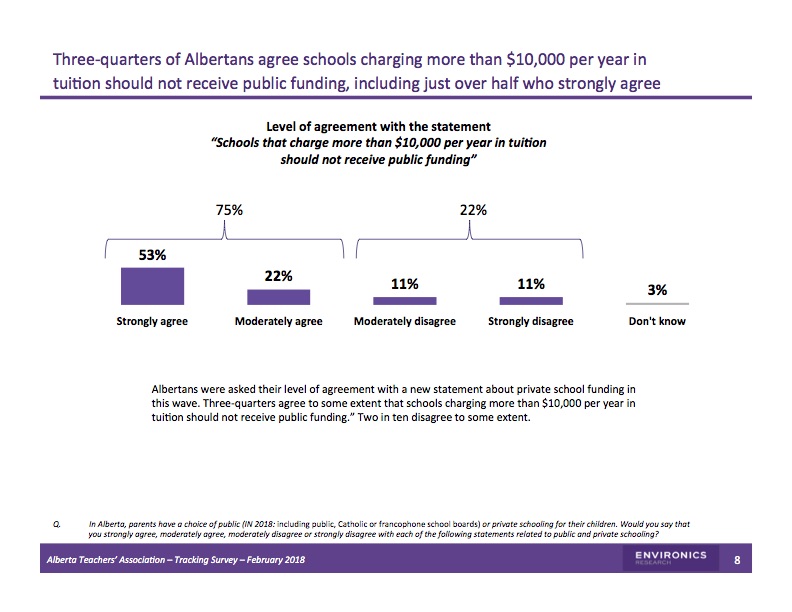 Not only is there broad consensus across Alberta on the need to stop subsidizing elite private schools but there is significant positive momentum on this issue. The percentage of people who strongly agree that public funding of private schools should be phased out and those funds reallocated to the public education system has jumped 12 points between March 2017 to February 2018. Overall support has jumped seven points in the same time. 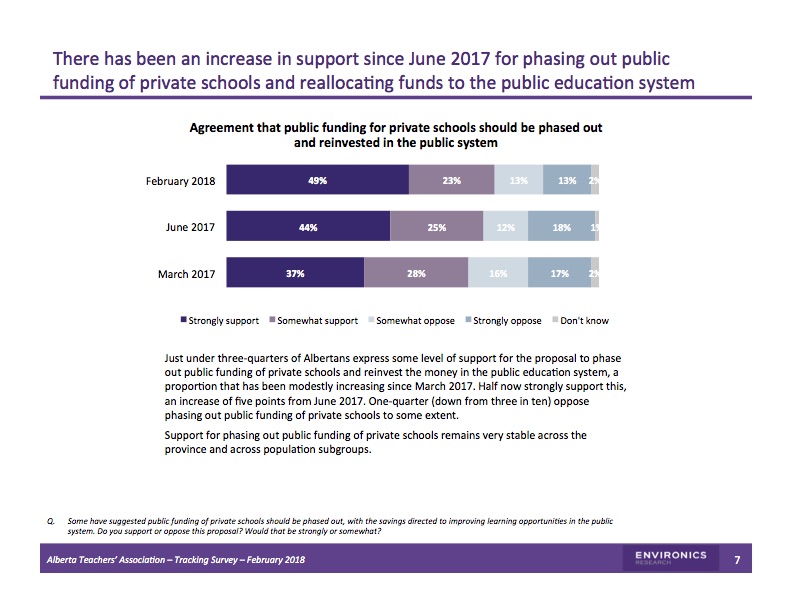 The poll results referenced are the findings of a telephone survey conducted among 815 adult Albertans interviewed during the period from February 20-28, 2018. The margin of error for a sample of 815 is plus or minus 3.4 percentage points (at the 95% confidence level).

The sampling method was designed to complete 800 interviews within households randomly selected across the province. The sample was disproportionate, with smaller cities and rural areas oversampled to permit meaningful statistical analysis. Respondents within each household contacted by landline were screened for random selection using the “most recent birthday” method. Cell phone sample was also included (25% of sample). The data are statistically weighted to ensure the sample’s regional, age and gender composition reflects that of the actual Alberta population according to the most recently available Census information (2016).

This poll was done by Environics and was part of regular surveys conducted for the Alberta Teachers' Association.